One of the challenges of putting together a major feature package for alumni magazines — on a new campaign, on alumni in the food industry, or on the future of higher education, for example — is finding a structure that gives all the different pieces a sense of coherence within the whole.

Certainly, putting together a feature package like this can feel exciting at first. There are so many sources and story ideas and approaches!

Of course, at some point you’ll probably see the flip side: there are SO MANY sources and story ideas and approaches.

How do you organize them? How do you create order and logic from the chaos, both for your sanity and that of your readers?

Is there a way that you can structure a package that actually gives each piece in the package more meaning than it could have on its own?

Here are four solutions — with tons of examples! — that you can use to impose structure on a feature to make it easier to develop, write, and read.

1. Organize with a journey-like chronology

Years ago, I read an enormous feature in Backpacker called “The Complete Guide to Fire.” It was dozens of how-tos, personal essays, glossaries, descriptions — you name it, it was in there. It was 15 (!!!) pages. It could have been a chaotic, unreadable disaster.

Instead, it won a National Magazine Award. 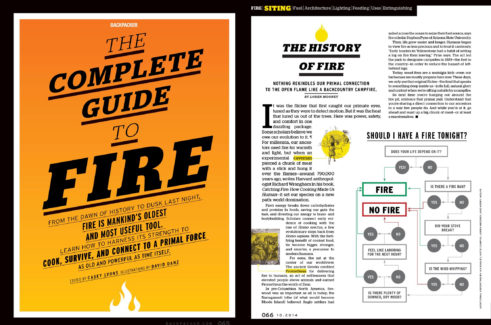 The Complete Guide to Fire

What made it work?

Part of its genius was structure, which it made clear at the top of every page. I’ve zoomed in on it for you below:

As you can see, the feature is organized with the help seven categories — siting, fuel, architecture, lighting, feeding, uses, and extinguishing. Each category has a two-page spread addressing a variety of subtopics within that category.

It’s more than that.

The structure of the story is the chronology of fire itself, from beginning to end. It starts with “siting,” the very beginning of the fire-building process, goes through the various stages of a fire, and ends up at “extinguishing,” which is the end of the process.

This type of chronology gives real momentum to the story. Even with the many elements within each category, there’s a larger sense of moving from a natural start to a natural finish.

Check out the full feature here.

Here’s another example: last year, I wrote a portion of a major feature package on entrepreneurship for the beautifully redesigned Spartan magazine from Michigan State University.

To get a handle on what would turn out to be an 18-page package, editor Paula Davenport and I talked a lot about how to prevent the feature from feeling sprawling and overwhelming, even though the sheer number of MSU alumni, events, offices, and initiatives linked to entrepreneurship was enormous. 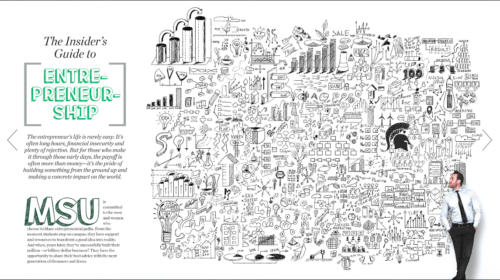 The Insider’s Guide to Entrepreneurship

We settled on a four-part structure that took the reader through four key stages of entrepreneurship: nurture an idea, launch the plan, lead the voyage, and expand the business.

Each section was four pages, covering stories linked to each stage.

The big idea is this: if you’ve got a major feature package, bring your readers on a clear journey that is linked to the topic of the feature. If it’s food, you could use the structure of a formal meal to move readers along. If it’s a campaign story for a new facility on campus, you could structure it like the building process itself.

In November 2016, Wired did a crazily ambitious issue on Frontiers. 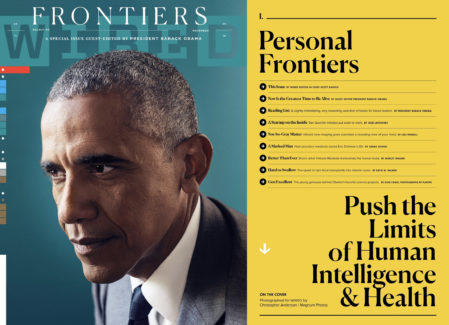 The magazine organized the issue by looking at the idea of frontiers at increasingly large scales. It started with “personal frontiers” — think brain imaging, personalized medicine, and aspirational reading lists. It ended with outer space, “the final frontier.” For that section, topics included living on Mars and sci-fi worlds.

This sense of movement, from tiny to vast, helps give a sense of structure and excitement to all of the many ways humanity seeks to go beyond its current limitations.

The whole theme issue is way too long to include here, but I’ve linked to all of the key pages that show each type of frontier, including the index of stories within them: personal, local, national, international, and outer space.

You may be able to impose the same type of structures in your own packages.

For example, if you’re doing a story on a series of rock-star students or alumni, show how they’re making a difference at a one-to-one level, the level of the university campus, the local community, the country, or the world.

Can you fit folks into different categories so that readers can get a sense of the enormous number of ways that people can make a difference, and how each “level” matters?

A few years ago, Real Simple had an “A-to-Z guide to cleaning almost anything.” 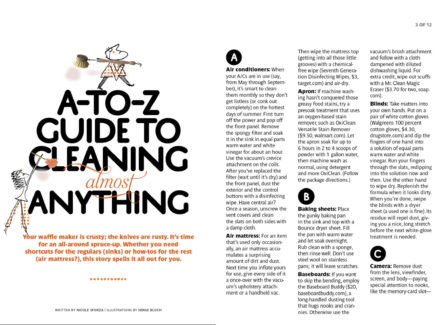 I’ll admit that I’m not really a fan of alphabet lists (I am so tired of the amount of free press that otherwise irrelevant things like X-rays and xylophones get), but it works here.

There are a million things that need cleaning, and a million ways that they need to be cleaned. This approach was a way to organize the story that felt comprehensive.

Perhaps you could do something similar with a story on study abroad, cool places and things on campus, or “Reasons to Love [your institution].”

Of course, you can impose alphabetical order without actually using the whole alphabet. Here’s one example: 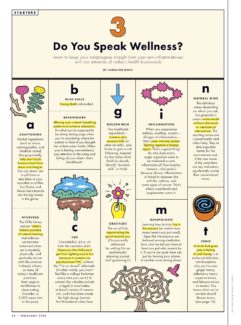 If you’re really stuck, here’s a simple and surefire way to organize your story: just make a numbered list.

Here are a couple examples.

Bon Appetit, a magazine that consistently brings home a metric ton of National Magazine Awards each year, organizes its front of the book section — Starters, natch — in a list. Each number covers a single topic.

For example, in a recent issue,
#1 was a selection of “wellness cocktails” available at restaurants across the country
#2 was a short essay about salsa and a recipe
#3 was a glossary of health buzzwords
#4 was a two-page guide to eating healthily on vacation 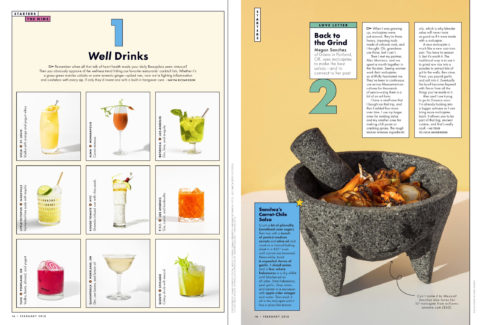 There is no “overarching theme,” but just numbering each part in order helps make it feel like these different things are tied together.

Similarly, Entertainment Weekly does its weekly “Must List,” which is a list of 10 things that fall under the category of “our editors like this stuff this week.” 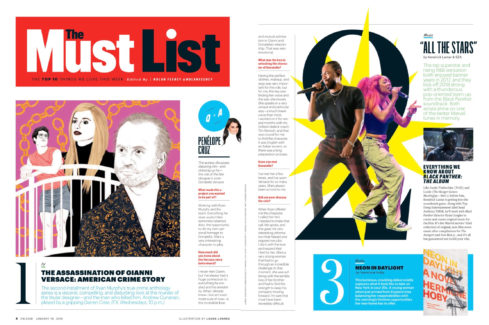 It’s all types of pop culture — podcasts, movies, books, television shows — and there are sometimes multiple parts to a single list item.

If this section weren’t organized into a list, it would feel incredibly weird and disorganized. But somehow, creating a list of 10 items feels like it both offers an abundance of choice for any pop culture lover for the week, and it also feels complete.

So there you have it!

Those are four ways that you can use to give order and coherence to a massive feature package.

Your readers will love it, because it will help them quickly grasp the structure of the story, and pinpoint the areas that they’re most interested in reading first.

You’ll love it, because it will make it easier to choose the best stories for the package — and easily say no to ideas that don’t quite fit.