Every year, I’m thrilled to be able to talk to the editor of CASE’s Robert Sibley Magazine of the Year, and this year is no exception. 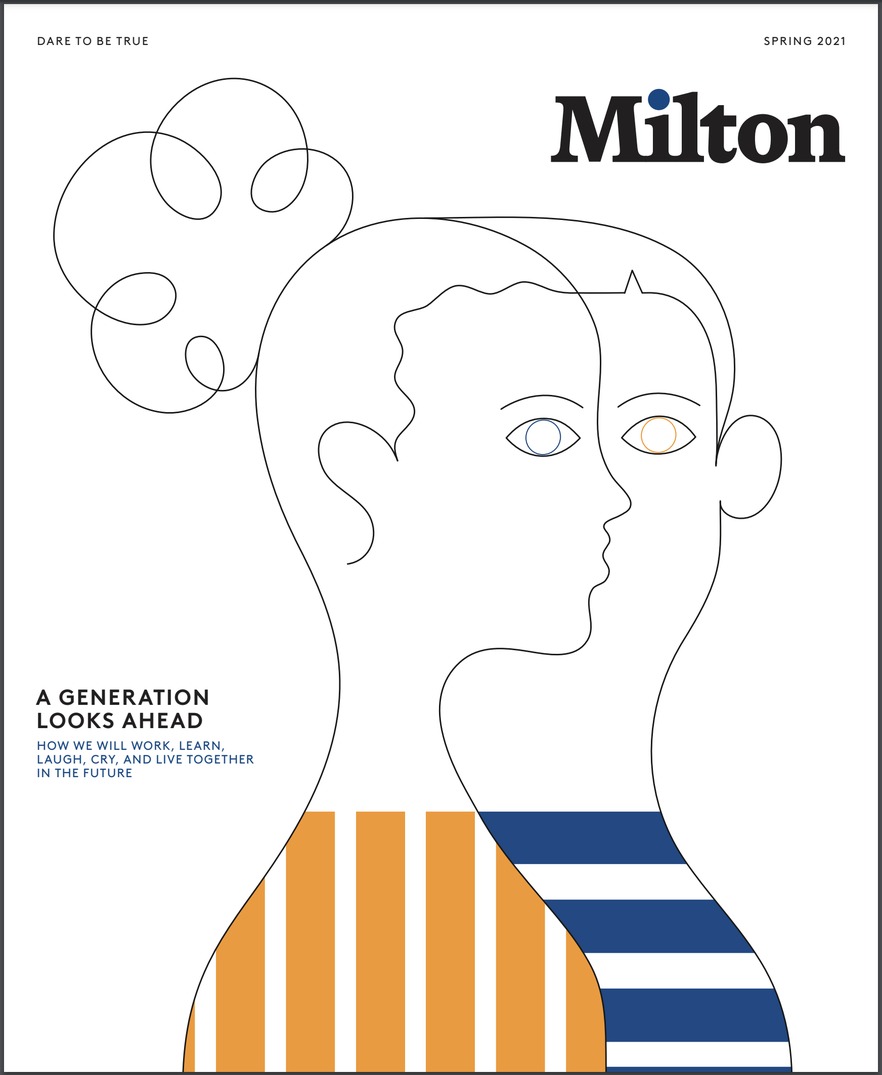 Every winning publication is a little different, and one particularly notable detail about Milton magazine is that it’s the first independent school to win the Sibley since the award started in 1943. (!!!) Check out the winning entry, entry materials, and judges’ comments.

First, a few details about Milton Academy and their magazine: Milton is an independent boarding and day school in Massachusetts with a total K-12 enrollment of just under 1,000 students, about two-thirds of which are at the upper school (grades 9-12).

Milton’s 80-page + cover magazine is perfect bound and published twice a year. It is sent to 13,500 alumni and families; it is also sent each spring with acceptance letters.

Sarah is a contract editor; the magazine also has a freelance designer. All of the writing, meanwhile, is done in-house (with the exception of the stories written by Sarah).

Sarah and I had a wide-ranging conversation, so instead of doing a typical Q&A, I’ll share some of the most illuminating insights from a longer discussion.

On Sarah’s background in higher ed communications.
I’ve worked as an editor of alumni magazines for many years — I started at Harvard in 1987, and I edited an alumni magazine for the School of Public Health and then for the Harvard Kennedy School. I had just retired when I was asked if I’d be interested in doing this as a freelance job. I’ve been doing this now for three years.

On the difference between higher ed and independent school magazines.
Well, parents are involved — that doesn’t usually happen at universities! So you’ve got to consider that, particularly when you’re writing about young students. You’ve got to check to make sure it’s okay to use their names, for example. There are privacy issues.

An independent school is a very small, very loyal community — there’s a sense that everyone knows one another and that your readers are definitely paying attention. Their time here was during a very formative stage in their lives. The coverage at this level feels much more personal.

On how the magazine is used as a tool beyond the alumni audience.
When admission letters go out in March, the magazine goes out with it. Is it a marketing piece specifically? Not really, but we do use it as one way to attract students. It doesn’t currently go out to parents, but I would like it to! We find that there’s tremendous loyalty among the parents and families; they’re very involved. And while there are different online newsletters and letters that go out, I think the magazine is it, in terms of printed pieces.

On the push to move from print to digital.
I know a lot of places are asking why they should be printing a magazine — why they shouldn’t just be putting it online. But at Milton they seem to value print. I haven’t had to make a case for it.

I think they get it: sending it to people’s homes and putting the magazine on the coffee table or the nightstand is very valuable.

With an exclusively online alumni magazine, the alum needs to make the effort to go online and I just don’t think that happens as often. A print magazine serves a very important purpose.

A story she is particularly proud of.
“Climate science” (part of the larger “A generation looks ahead” package).

It was ambitious. I included several alums who all worked under the larger umbrella of the environment. It was a lot of work to pull it all together, and I think this is a topic that we’ll continue to write about.

On editorial and design collaboration.
At the production stage, there’s a continuous back and forth with the designer around multiple issues—from photos, illustration, and typography choices to what goes on the cover — and you want to be working with someone you feel comfortable around — someone with whom you have a good rapport.

It’s so important to form a strong partnership with a good designer — whether the designer is in-house or a freelancer — someone whose work you respect and with whom you’re comfortable working. They play a huge part in the success of a magazine.

On what she still wishes she could improve.
The news section, which doesn’t quite have the right balance of school news to alumni news. I think readers would like to know more about what the students are up to.

Also, I want readers to be able to pick up information about the school in a variety of ways — maybe shorten some of the stories. I’d like it to have more energy.

On thinking about your audience.
When you’re putting together a magazine, you always want to keep the reader in mind.

Most people don’t have a lot of time. You want to offer them good, substantive feature-length stories, but also offer shorter pieces, strong headlines, informative subheads and pull-out quotes, and good photos with captions.

I’m always pushing to have more entries in class notes, with vibrant photos. Being aware of the reader — standing up for your readers — is really important.

On working with administrators.
We do send stories by our senior administration. They’re great at pointing out potential issues, which you need to respect. But you also want to help them see the magazine from the point of view of the reader. What will entice a reader to pick up the magazine and spend time with it? Administrators are deep into running a school and sometimes need reminding about what all of us look for when we pick up something to read.

On building trust through methodical advance work.
We always make a case for why we’ve chosen a specific theme, and the stories we want to tell. It’s not an off-handed conversation.

A lot of the trust we’ve built has come from what we’ve produced, and the fact that administrators are receiving good feedback. When they hear people like the magazine, that builds trust.

Inspiration.
I do look at other magazines. Some of the small, private colleges do beautiful work: Kenyon does a great job. Denison does too. Those magazines are both beautiful. Johns Hopkins. I’m impressed by the quality and depth of the stories they choose to cover.

Other magazines that stand out to me include Middlebury Magazine and Harvard’s School of Education alumni magazine, Ed.

They’re all inspirational and something to work toward.

On what she misses about in-person work.
It was nice to be right next door to the magazine team because there’s so much back and forth when you’re putting a magazine together.