Today, I’m excited to share an interview I did with the editor of George Washington University’s alumni magazine, Danny Freedman. He talked about what went into the planning for GW Magazine, how he and his team approach their stories differently than those at other alumni and university magazines, and what advice he has for others plotting out their own theme issues. 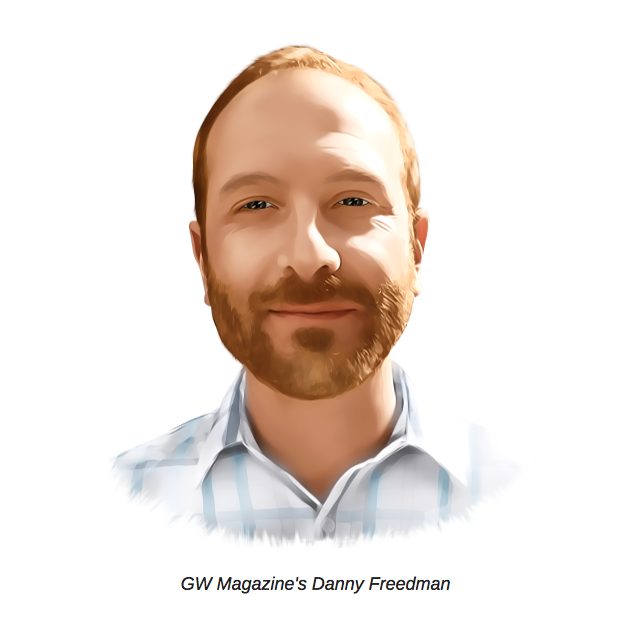 If you’re interested in reading more about theme issues, you can read the interview I did with the former and current editors of Stanford Business Magazine, Michael Freedman and Deborah Petersen.

Tell me about the genesis of the issue.

We’d taken on our first theme issue last summer; it revolved around adventure and it was just a lot of fun to put together.

That one took shape as four features: We had a round-up with 10 or so vignettes, from the doctor who founded a clinic at Mt. Everest’s Base Camp to the first person to circumnavigate the globe in a submarine to a dentist-turned-part-time-racer who helped establish the Corvette as a muscle car. We talked with an acrobat and we talked with a space shuttle commander.

We also had a feature on the visual effects supervisor for that summer’s blockbuster, Wonder Woman. We did a feature on a paleontologist in South Africa who was working on one of the largest dinosaurs of the early Jurassic period (now called the “Highland Giant,” but its first nickname, decades ago, was the “Holy S*** Dinosaur”). And we commissioned a first-person feature from a 2013 alumna who’d been working as a foreign correspondent, covering conflict in Egypt, Iraq, Afghanistan, Syria and elsewhere.

That issue was a lot of fun — it was different, and the confines of a theme gave us a new challenge to puzzle our way through. It was well received, and so we started thinking about other themes.

We knew we didn’t want to do topics like “food” or “water,” which so many have done so ably. We were kicking around ideas, and Matt Stoss, our associate editor, suggested “power.” The more we thought about it, the deeper it resonated. There was nowhere that a “power” issue couldn’t go.

The one thing we knew for sure at the outset was: We didn’t want this in any way to resemble a typical D.C. “powerful people” list, either in form or function. We wanted stories that went beneath the surface to something genuine — what it really feels like to encounter power, to wield it, to have it wielded against you.

We started a list of types of power that seemed ripe for exploration — electrical, political, familial, muscular, etc. — and we got busy searching.

How much more effort did it take to do a theme issue compared to a regular issue?

For us, these took quite a bit of doing, maybe in part because we were new to it.

It’s tough to quantify how much more effort. Here’s one measure, though: I’d say for the two theme issues we’ve done, we began working — brainstorming, searching, winnowing the list — a full year out, where ordinarily we might just be planning six months or fewer in advance.

Finding good stories that fit inside a single topic and offer an array of angles required extra time. For the “power issue,” we ended up with 10 features across 50 pages of the magazine.

Did you consider other themes before choosing this one?

A bunch. And it became clear pretty quickly which ones had the right constellation of potential breadth, tone and intrigue.

“Power” is something everyone can relate to, and we were sure there were good stories within our alumni body.

We had set aside ideas like “wood” and “meat” that we hadn’t seen done before; they might be really rich subjects for another alumni body, but ultimately for us seemed to increase the odds we’d come up short.

Tell me more about why you decided to create subcategories of power (natural power, manmade power, and the power of identity) in the table of contents. Did it limit you? Did it open up different types of possibilities?

Actually we came up with this later in the process. With 10 features, we realized the magazine would feel unruly, and some of the smaller stories would get buried.

We hoped the categories would give it structure, and they allowed us to create three visual pauses (and mini-TOCs) (page 26, page 46, page 64) to break up the content.

What were you proudest of pulling off in the issue — was there anything that worked even better than you imagined it would? Anything that didn’t quite meet your expectations?

I’m proud of the designers for building an aesthetic throughline that could tie together so many stories and so many pages. That’s tough.

Lastly — and I offer this under my own free will, honest — this is all possible because we have bosses who trust us and give us the latitude to pull off things like this. And I’m proud that, over the years, we’ve won that trust.

Were there things you really wanted to do in this issue but couldn’t, for whatever reason?

Not much. There were of course a few stories we didn’t get to tell, just due to time, but we’ll get to those eventually. And it might’ve been nice if we could have arranged for the front-of-book to be part of the theme, too — just “power” stories, cover to cover. Maybe next time.

One of the things I love about GW’s work is that you seem to really care about getting the details right. Are there specific things that you did that you’re really proud of — but that also might be easy to overlook?

Wow, thanks. I’m glad that comes through.

One thing that comes to mind is the use of outside sources. For us, it’s one of the easiest things we can do as an alumni magazine to show readers that we’re serious.

It doesn’t always pan out: In our profile of an alumna who was struck by lightning, part of the story revolves around a private audience she had with the Dalai Lama during her recovery. The writer, Matt Stoss, reached out to the Dalai Lama’s press people to see if he might want to talk for the story. We never heard back, but it was worth a try. [Erin adds: !!!!!!!!]

Matt did get other sources, including the alumna’s 14- and 10-year-old kids, who added this wonderful comic relief to the storytelling (they told Matt that electronics and WiFi seem to go on the fritz when their mom’s around), but also a new perspective — we hear from the kids how their mom broached with them that incident and what she passed along to them about lightning.

Similarly, in the story about the Vietnam veteran who is the second-longest-held American POW  in U.S. history, our colleague Rachel Muir sought and received reflections from the now late-U.S. Sen John McCain, who spent five and a half years jailed in the “Hanoi Hilton” with our alumnus. That added a new dimension to the portrait she was sketching.

Did you do any promotion or story sharing in other channels, like social media, web, etc? What did that look like?

We promoted the stories on our Twitter feed (@TheGWMagazine), and got some good boosts from interviewees sharing the stories themselves on social media.

Plus, for each issue we send a table-of-contents like email to all alumni, students, faculty and staff. But we didn’t have a chance to do as much promotion as we would’ve liked. It’s an area we’re working on.

We’re a full-time staff of two, so we really need a strategy in place in order for that promotional legwork to not get lost in the shuffle.

It seems like the issue was well received, based on the letters in the subsequent issue. Were there any other metrics or anecdotes that indicated that the issue made an impact?

The letters are probably the most meaningful indicator. Any time people are moved to take a moment out of what they’re doing to send us a note — a nice note, at that — really makes me feel that we struck a chord.

It also helps us demonstrate here the magazine’s role in connecting the alumni body and that, as with all things, when we put out good work and authenticity, people respond to that.

What did you learn from the experience that you would do differently for a theme issue in the future?

But it would’ve been nice to find a way to present even just one feature visually. The University of Alberta’s New Trail magazine did a “future of everything” issue a couple years ago and did a fantastic job of mixing narrative and more visual storytelling.

I also think about something I saw in Stanford Business a few years ago. All of their issues are theme-based; they did one around the idea of “risk,” and there in the bottom corner of every right-hand page, almost imperceptibly, was a flipbook illustration of a stick figure jumping out of an airplane, free falling and then opening a parachute.

What a brilliant, light touch of levity. Next time we do this, I think I’d strive to find something like that—something that’s just for fun. [Erin adds: This is incredible. It’s also something that only a print magazine could pull off. I love it when folks find ways to maximize the medium they’re working in. If I had gotten that magazine as an alum, I would have kept it on my coffee table forever, and would have shown people that little delightful detail.]

Any advice for folks planning out their own theme issue?

***
Planning out your own theme issue?

Tell me what topics you’re considering, what’s proving toughest, and what your hopes are for the finished product.