In mid-2020, Albion had just wrapped up a $100 million campaign, one of the largest and most successful in its history.

The team had decided to mark the moment with a major package in the Fall/Winter issue of its alumni magazine — a project that John Perney, Senior Director for Editorial Development, called “a publication within a publication.”

Albion gave us a call at Capstone, and we worked with them to map out an idea and a process that would ultimately lead to this 24-page piece: 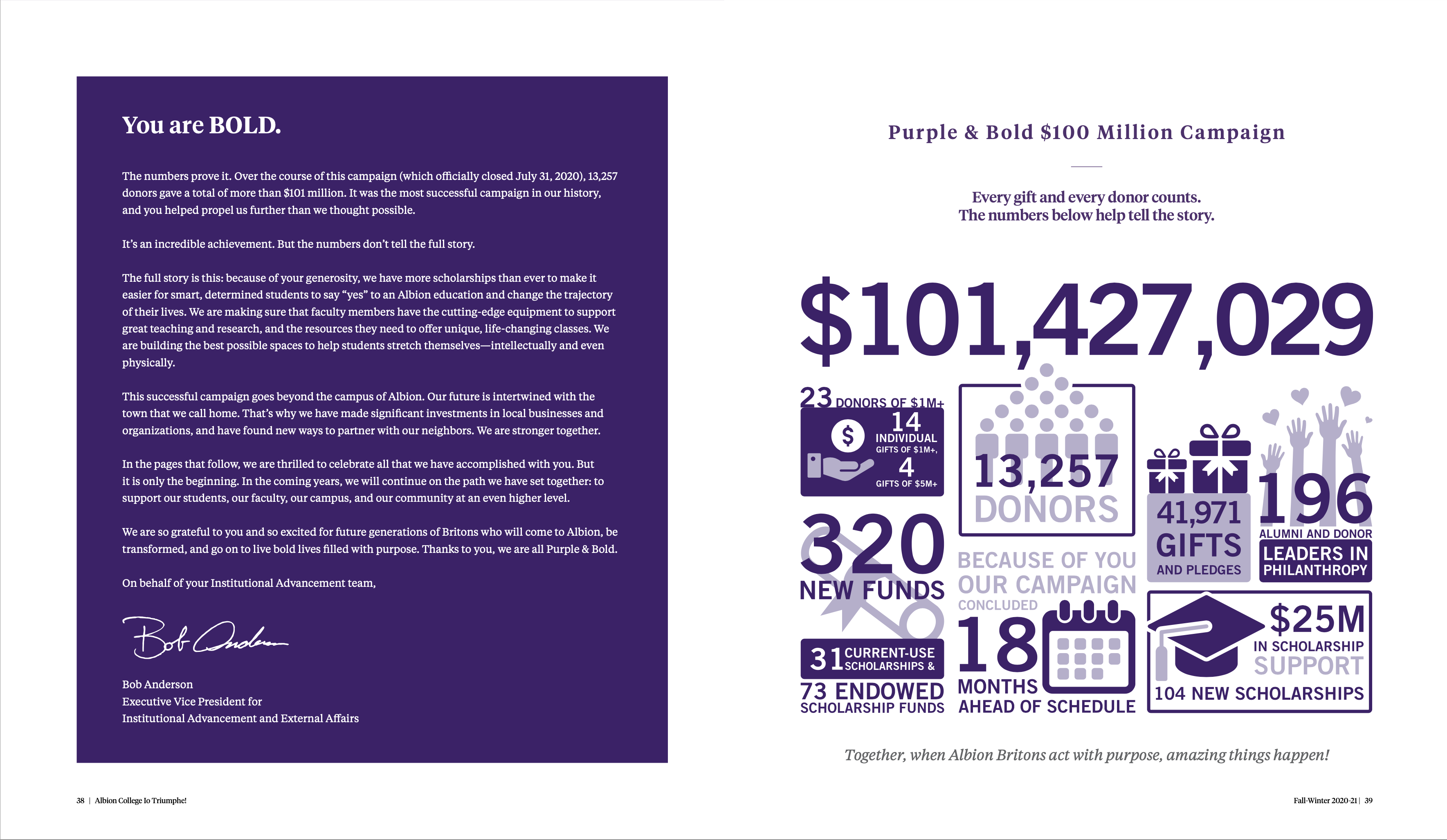 The package included interviews with more than 30 individuals and couples linked to five major campaign initiatives.

We had three members of the Capstone team — all highly experienced higher-ed writers — develop short, sharp profiles that offered insight into donors’ reasons for giving and served as a public thank you for all of their help.

A lot of work went into coming up with the right angle for this project!

But what I want to focus on here are the processes that we used to turn that idea into reality. These processes ensured that all stakeholders — the editorial and advancement teams and the sources themselves — were thrilled with the outcome.

If you’re looking down the barrel of your own big project in the coming months, make sure you’re thinking about the way you’ll do the work to help it succeed.

1. Have the right “tough love” conversations early on to combat unrealistic expectations.

When we first talked to Perney and his team at Albion, it was clear that the college had big ambitions for the project. They also had timelines that would be tough to meet.

“We approached Capstone on a very tight timeframe, one that turned out to be a bit unrealistic on our part, given the scope,” recalls Perney.

No matter how early a big project starts, it almost always takes longer than expected. Once every step in the process has been factored in, the projects that many feel certain should be done in a month or two often take double that.

At Capstone, we know what it takes to move a project from idea to execution, and we give clear, realistic roadmaps for every project.

Once Capstone was able to provide that step-by-step timeline, the team at Albion reassessed to focus on what was most important. “We adjusted accordingly,” says Perney. “We pushed back the magazine release date.”

These aren’t easy conversations to have, whether you’re on staff or an outside firm. But the earlier you can have these discussions, the more quickly everyone can get aligned and prevent heartburn going forward.

How we do it: At Capstone, we’ve worked on alumni publications for more than 20 years, and we know exactly where projects most commonly break down in the process — from the occasional unresponsive sources to internal slowdowns because of vacations or other priorities.

We have a complete playbook that we follow to prevent and overcome common problems, from building in check-in processes to coming up with backup sources in advance. It also allows us to map out realistic timelines — and meet them.

When many groups are working together to achieve a single goal, how do you prevent a last-minute, headache-inducing scramble for source approvals or corrections?

It’s easy for something to slip through the cracks when a project has many moving parts.

A simple written check-in each week can help teams stay organized on projects that can stretch for months.

At Capstone, we compile a four-part “action checklist” that we update and email to stakeholders each week. It’s a 60-second read that stakeholders can complete over coffee each Monday morning.

Amy Everhart, Associate Director of Campaign and Leadership Engagement, says the check-ins were helpful to keep the project on track. “Capstone kept us constantly updated on their progress and were professional in following up on what they needed from us,” she recalls. “They were a joy to work with.”

How we do it: A simple, targeted email each week ensures that nothing ever gets off course. It also prevents situations in which people get bombarded eight times over two days with project-related requests that can easily get lost in an email inbox or a Google doc.

3. Build robust approval processes to help the project succeed beyond the publication.

Yes, everyone wants their publications and story packages to be beautiful and reader-friendly.

But that’s just one of the goals. Most major projects also have a project behind the project. It isn’t always articulated in quite that language, but it’s just as important in calculating its overall impact and success.

For this publication, Albion wanted to offer the best possible experience for the donors featured in the publication. These men and women were the college’s biggest champions, and they deserved five-star treatment.

That meant that alumni and community supporters were introduced to Capstone writers through someone on Albion’s advancement team. It meant that multiple team members on the editorial and advancement staff scoured the copy to make sure no detail was missed.

It also meant that sources all had the opportunity to review copy before it was published.

Because these men and women had invested heavily in Albion, it made perfect sense that we would invest in making the experience great for them.

The reality is that the most beautiful, engaging campaign wrap-up document wouldn’t be much of a success if the process or stories ticked off the school’s biggest supporters. We all wanted them to be happy with both the process and the finished product.

To achieve this goal, we worked carefully with Albion staff members to create a source list, writing approach, and approval process that was both clear and thorough. We made slight adjustments throughout, but the right building blocks helped us get off to a strong start.

How we do it: At Capstone, we know we’re ambassadors for your school. We’ve also done countless major projects, from annual reports to anniversary publications to campaign materials. We’ve built a process that reflects that experience, and takes even the tiniest details into account.

We’re thrilled with the way that the project turned out — and so was Albion’s team. Here’s what they had to say:

“We really appreciated and relied on Capstone’s expertise in the advancement editorial space. Erin and her team helped us understand what we truly needed in order to get what we wanted out of this end-of-campaign celebration. They know alumni magazines, and the alumni-magazine process, inside and out.”

“When we first started this project, it felt almost too large to tackle. Capstone quickly captured our brand and produced content that captured the Albion essence.”

“Capstone worked with us from fine-tuning the concept all the way to finished content. It was beyond helpful to have an experienced and steady hand as a thought-partner as we considered our approach on the front hand, and helpful to have talented storytellers to deliver the written content. It felt seamless.”

Want to learn more? Get in touch.