One of the joys of producing a magazine is the chance to take a big swing on a story. Maybe it’s once an issue, maybe it’s once a year, maybe it’s when you’ve got a big strategic initiative or anniversary to share with your readers.

Big swings stories can make a splash. They can become reader favorites, they can win awards, they can help you build credibility with your boss (and your boss’s boss).

To make the biggest possible impact with these stories, it can make sense to get help from someone who’s been through the process before.

That’s what Cedars-Sinai Discoveries senior editor Sarah Spivack LaRosa and her team did when they called me up to talk about an idea they’d been thinking about for awhile. They called it “How to think like a scientist.”

I immediately saw the same potential in the story that she and her team did.

Together, we worked to create this incredible 8-page feature package (Check it out in print or online). 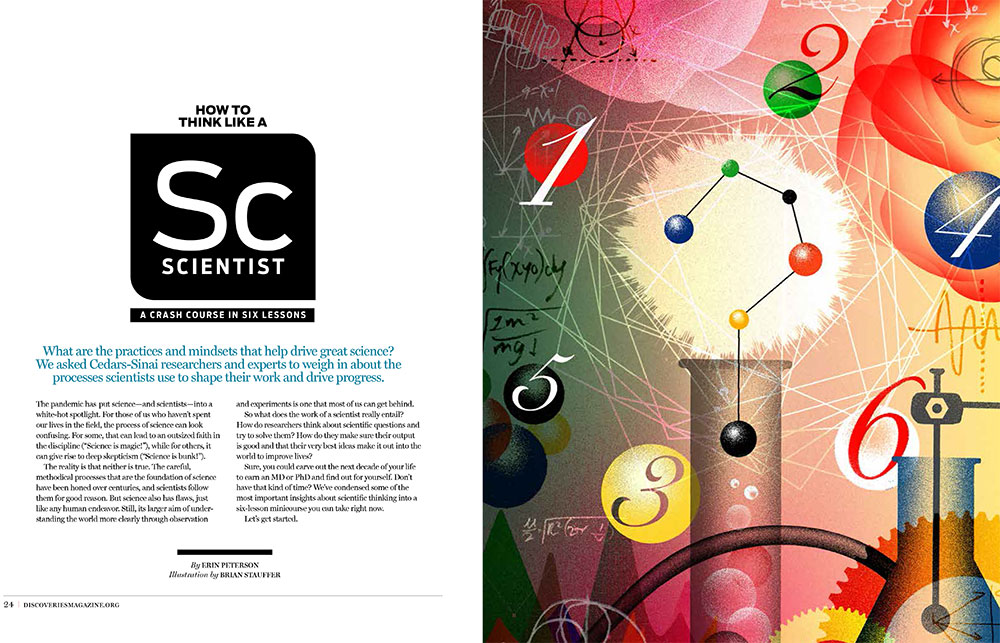 So how do you go from an amazing concept to a finished feature package?

Here are the steps that Sarah, her team, and I took. Notice everything that went into the story behind the scenes to make the final piece exceptional.

1. “We didn’t want to bore the pants off of everyone.”

One of the things I strongly believe is that for big swing stories, the vast majority of the most important work happens before you do a single interview.

Framing the story with a clever concept. A smart concept isn’t just delightful for the final reader. It actually makes every part of the storytelling process — from reporting to design to promotion — easier.

Sarah and her team had already nailed down the amazing “How to think like a scientist,” concept when they came to me.

This all started because we were talking about how to explain to people that just because two studies produce conflicting results, it doesn’t mean science as a practice is flawed.

This kind of thing comes up a lot with health reporting. People have a reaction of: ”Well, last month I read that red wine is good for me and this month I read that alcohol in any quantity is bad…so I guess nobody knows anything and you can’t trust any studies.”

We wanted to figure out how to describe the rigor of the scientific process and the publication process — but in a way that wouldn’t bore the pants off everyone.

They had a big idea motivating the story and an irresistible hook to draw people in. This is an outstanding foundation for a feature package.

But it’s also just the start. Pulling together all the pieces — and sequencing the process properly to make the most of every opportunity — came next.

2. “Leading with structure is vital.”

From the jump, we knew this would be a highly packaged story with many different parts.

But knowing that there will be many parts can at first feel overwhelming.

Here’s how Sarah describes the challenges.

We did feel that we had a compelling concept, but we weren’t sure how all the pieces of the jigsaw puzzle were going to fit together—or even what all the pieces should look like.

This is where I was able to come in and help — in addition to building smart concepts, I love organizing stories into clear, cohesive arcs. I like to find just the right storytelling technique for every part of the package.

Sarah knew this, too.

We were familiar with Erin’s prolific work, especially with complex story packages, and we thought she could help define different subsections of the package and figure out how to make it all hang together.

I took the jumble of great ideas that they’d already developed, analyzed them, and came up with a six-part, numbered structure (which you can see in the finished piece) to organize the story, moving from the start of the scientific process to the end. This clear, logical pathway helped bring the reader through what can sometimes be the messy process of science.

Sarah agreed that building in this type of scaffolding was essential:

After you have your big idea, the next most important thing to hammer out is your architecture. I think it helped that we had a structure in mind BEFORE Erin did her interviews, so she knew what questions to ask to whom and had a vision of how each source would fit into the piece.

Of course, we had to be flexible so we could make space for unanticipated anecdotes and pearls of wisdom, but leading with a structure is vital.

3. “Let your designer in on the process early.”

As I mentioned earlier, getting to a good finished product requires a significant chunk of the work to be done very early in the process. That’s not just the words! It’s also illustration and design. Here’s the advice that Sarah gives about the design process:

Let your designer in on the process early.

We gave ours a very early draft to play with so he could experiment with different design directions. With a package like this, design is key to making it digestible.

Sarah’s exactly right — and the truth is that this part of the process can be an inflection point.

Great words can only take a story so far: great design is what immediately captures a reader and helps them decide if the story is worth their attention. Excellent, nuanced design amps up the impact of a good story. Poor design means the reader will turn the page without a second glance.

To help with this design process, I sent along a handful of PDFs of stories from alumni and consumer magazines that had used similar structures successfully. Designer Tim Baldwin had them as inspiration, but he came up with something that was fresh and served the story well. (I’ve collected literally hundreds of examples of story design, story structure, and story ideas with my very scientifically named “Good idea database,” 😂 and you can do this, too!)

4. “We were able to pack a lot of little goodies into the story.”

If you’ve published a print magazine, you know the combination of pride and exhaustion that comes when you’ve finally pushed the magazine out the door, and when that first issue arrives in your hands.

When it’s complete, do your best to look at the story with fresh eyes to appreciate the hard work that everyone has put into a project. Here’s what Sarah says about the many details she loved:

I love the overall organization of lessons and the little subsections like “Trial and Error,” “Case Study,” “Formula” — we were able to pack a lot of little goodies into the story without overwhelming the reader.

I also love the quotes about how to ask a good question, and I think the bias section is very important—we acknowledge there are flaws in the system because scientists are only human—but also offer solutions to avoid bias.

Amazing! I love this story, too.

Collaborations like this are a dream: everyone contributed their expertise to help create something that none of us could have done on our own. The result of months of hard work was a story that was beautiful, surprising, and evergreen.