One of the toughest stories to get right in an alumni magazine is the strategic priority story.

You know the type: a school has invested lots of resources and mapped out a brand new vision about where it’s headed over the next 5, 10, or even 20 years.

Now, they have a report in hand, a series of objectives, and a checklist of action steps.
It’s your job to pin that big vision down in your magazine into something that feels exciting and relevant to your readers.

So how can you do that? I want to share the approach I took with Kent Place School’s Strategic Plan: 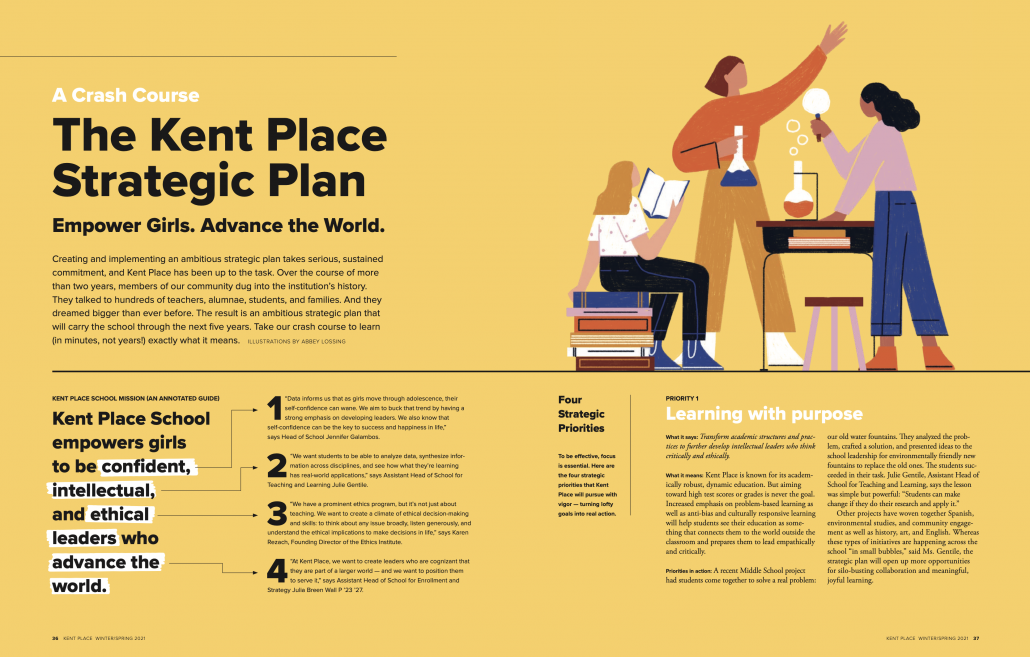 Here are just a few ways I thought about making this story work.

Kent Place is a K-12 independent girls school (with a coed preschool) based in New Jersey with about 650 students. Their magazine comes out twice a year.

When editor Rachel Naggar contacted me about the strategic priority feature package, Kent Place already had a strategic plan in place.

For the magazine, she wanted something different. Here’s what she said:

“I knew I wanted to talk about the strategic plan in our magazine, but I didn’t want to fall into the trap of just listing our priorities and action steps, which we’d already done in a printed piece and on a microsite. This magazine feature, to me, was a chance for the plan itself to come alive.”

I developed a few concepts based on the plan itself and conversations with Rachel.

But I didn’t just want to describe what was possible, so I showed her what a story like this could look like with sample magazine pages from other publications that used similar concepts in unique ways. With these examples, she could imagine what the finished product could look like for the reader.

“I’d been following Erin via her newsletter for a while and had always been impressed with how she could take something that seemed cut-and-dried and flip it to make it fun for a reader. She listened to what I was hoping to accomplish and came up with some fully thought-out ideas, complete with visible examples of how they could be presented, which took some of the pressure off me. I thought her idea of turning the feature into a crash course was great. I loved these two lines: “The result is an ambitious strategic plan that will carry the school through the next five years. Take our crash course to learn (in minutes, not years!) exactly what it means.”

2. Pull it apart — then put it back together

Think you’re going to get your readers to commit 20 minutes to a 5,000-word narrative masterpiece on the strategic plan?

I think about feature story packaging a little bit like a Lego kit: how can I take a few different pieces and assemble them in ways that create a cohesive whole — and ultimately, more than the sum of its parts?

I aim to make each piece of the package compelling and worth reading on its own, knowing that I might only snag a reader’s attention for 30 seconds. I also want committed readers to come to the end feeling like each part of the package gave them a new understanding of the larger topic.

In this case, I chose to use an annotation, a tiny Q&A, and short text groupings that illuminated the strategic plan priorities in concise ways, complete with quotes from important sources.

For Naggar, the approach was a good fit.

“I think what I’ve learned through this and also just being an editor of a school magazine is that you shouldn’t feel pressured to tell every aspect of a story. Sometimes focusing on a particular angle is much more appealing to the reader. You can add sidebars or infographics to expand on pieces and create visual interest.”

Strategic plans are supposed to be visionary.

But a story in your magazine will benefit from having clear, concrete examples of what those big ideas mean in practice.

This typically isn’t as hard as it seems. Oftentimes, strategic plans end up saying something along the lines of “We’re doing this new thing — which is just like what we’ve done in the past, only moreso!”

In other words, most pieces of a strategic plan have some sort of precedent. Sharing details about similar, existing work can help readers understand what the coming years might look like.

For example, Kent Place had ambitious academic priorities in its strategic plan. A water fountain improvement project that had been done by a class in a previous year illuminated those ideas effectively. So I described the project and drew lines between what was already happening and what would be possible in the future as they fully committed to big academic ideas.

Similarly, to highlight the school’s priority about developing students as ethical leaders, I zeroed in on some curriculum that was already in place — but would be expanded and enhanced.

You get the picture.

The examples that sources shared for each of the four priorities of the strategic plan served as a starting point that helped readers see the direction that the school would be taking.

I love how this story turned out. Strategic plan stories can sometimes be a slog, but the right approaches can imbue them with a sense of joy and personality.

Don’t want to do it on your own? Get in touch and I’ll show you exactly how I’d work with you on your next big project.