How to big with a story

Kenyon is a small liberal arts college in rural Ohio with about 1,700 students who come from all over the world. The Kenyon Alumni Magazine is published three times a year and is sent to 24,000 alumni and friends.

Kenyon Alumni Magazine editor Elizabeth Weinstein had a spring/summer issue all mapped when the pandemic hit. As she and her team transitioned to remote work, she realized she had a big problem on her hands: a story lineup that now felt all but irrelevant. “We scrapped almost the entire issue,” she recalls.

But how could she cover a fast-moving and uncertain moment? Because of the timeline of the publication, anything her team produced would take months to reach the hands of their readers. How could she cover an event in the moment in a way that would feel relevant when readers received the magazine?

Here’s how she thought about it.

“It felt urgent to me that we document the experiences of alumni in this historical moment, and I wanted to do this without applying any filter, spin, or analysis. I wanted to put something out in the world that captured, in a printed time capsule, the human experience across a large, diverse cross-section of alumni.

Logistically, and with only a few weeks of time to get it done, I knew this would be a challenge to pull off. It felt important to include the most ordinary, real and raw moments of people’s experiences adapting to the pandemic.”

With the help of her colleagues, Elizabeth collected a list of more than 50 alumni who might be able to share their perspectives for the story, from doctors and school principals to business owners and event organizers.

The list of sources and motivating ideas were strong.

But executing on this idea required a partner who could wrestle this massive topic down to the page — and bring expertise and empathy to the story while meeting every deadline. 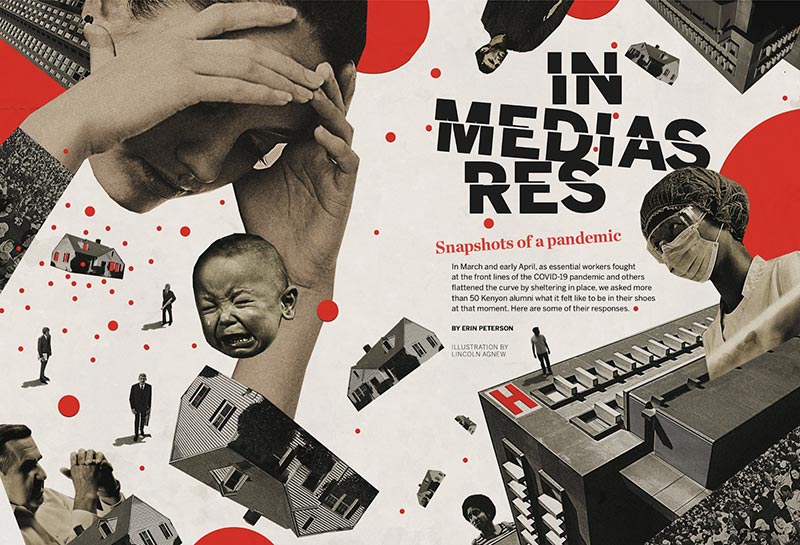 Elizabeth has a strong group of writers who she relies on regularly, but for a major, sensitive story like this, she called me and my team at Capstone.

“When it came to this story, I knew there was really only one writer I could trust to do this amount of deep research, with great sensitivity (approaching people during a pandemic could easily become fraught), and turn it around quickly for us: you!

I also know, from working with you on other stories, that you are incredibly thorough in your research and reporting, that you have a great understanding of the pressures facing small liberal arts colleges, and that have the most robust fact-checking system in place I have encountered as an editor who works regularly with freelancers. I had confidence that if anyone could pull this off, you could.”

First, we agreed on an overarching format that we would use to structure the story.

Elizabeth had a strong general sense of what she wanted and we talked about her big goals for her story. With her specific aims in mind, I collected and shared a handful of similar stories — pulled from Capstone’s database with hundreds of classic, modern, and award-winning story samples and structures — that both she and her design team could refer to.

I also worked with Elizabeth to develop a series of questions that we both felt confident would lead to unique and thoughtful responses from alumni. I developed a simple filtering mechanism to make sure that we were getting great responses from those who had the time and bandwidth to respond — while quickly stepping away from those who were overwhelmed.

We were also able to incorporate many of Kenyon’s VIPs, who contributed valuable insights to the storytelling.

In total, I heard from dozens of people and had many tens of thousands of words of raw material to work through to build a story.

While some of the vignettes that would get top billing were obvious — the physician who shared insights from his time working with Dr. Anthony Fauci was a highlight — the value of other stories were more subtle.

The hospital chaplain who helped doctors think through what patients would get ventilators in the event of a shortage, for example, said this:

“To the question, ‘What can you do with a philosophy major?’ My answer is, ‘I am doing it right now.’ I am calling on my knowledge of ethics, religion and history every day. I am telling my medical colleagues things that help them hold on to the ‘bigger frames’ of culture in making sense of this crisis.”

The quote would have been easy to gloss over among the tales of in-the-moment heroism.

But anyone who works in a liberal arts college has seen a version of this question countless times. An alum who can succinctly explain the value of a philosophy degree during a world-changing crisis? Well, that’s worth trumpeting. I made sure to include the quote in the story. (Elizabeth immediately saw its value, too: It got a half-page highlight in the magazine.)

Once Elizabeth had reviewed the story, my team and I completed a thorough source-approval process — one that we’ve honed over the course of a decade. There were no last-minute surprises, and we made subtle adjustments to make sure everything was perfect.

I couldn’t be prouder of the final result: You can see the story online here, or get the PDF here.

After the magazine went out, the kudos came rolling in: Elizabeth’s boss, the VP of Communication, was delighted “by how real and human it all felt.” She added:

“People rarely talked about the things we expected them to talk about (COVID’s impact on their professional lives), and instead let us briefly into their heads with intimate snippets from their everyday challenges and triumphs.”

Elizabeth says that Kenyon also used pieces of the feature package for a range of other initiatives:

“Before it ran, our development communications team snapped up the stories submitted by frontline workers responding to the pandemic and created a campaign to thank these alumni for their efforts and for giving back to their communities for Giving Tuesday. We also pushed some of these stories, and later, the feature, out in alumni e-newsletters, and, of course, on our website and social media.”

The story resonated with readers, and the feature is now a model the Kenyon communications team hopes they can replicate, says Elizabeth.

“I’ve received uniformly positive feedback on this feature. It really captured the moment in amber and is already being talked about, at least internally, as a bar-setting story that others like it will need to live up to in future issues.”

What you need to know

Guys, this is a great example of an editor and institution that works extremely effectively with outside partners to make the most of their contractors’ expertise.

Sometimes, you’ve got a project on your hands that’s so big and so important that it’s worth it to work with someone who can help you amplify and extend its impact.

I love working with teams who want to “go big” with their stories. If you’re ready, get in touch.