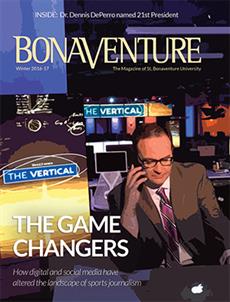 While she was on professional forums and read dozens of great alumni magazines, she still felt that her magazine, Bonaventure, would benefit from an upgrade. “I think we consistently produce an interesting and well written publication,” she says. “But I feel like it suffers from being too ordinary [in some of] its content and design elements.”

She didn’t have a big budget for an expensive redesign, but she was interested in making a targeted investment in her publication.

That’s when she discovered the Capstone Magazine Action Plan.

The plan, a head-to-toe analysis of the content, design, and reader engagement of the publication, was more than a critique. It offered a roadmap for the strategic shifts that she and her team could make on the budget they actually had — not the one they wished they had.

To get started, Eberth and her team filled out a questionnaire and completed an in-depth call with Capstone.

From there, Capstone’s team of editors, designers, and researchers did a thorough analysis of a year’s worth of the university’s magazines and created a detailed report, complete with an appendix filled with templates, ideas, and examples that she could use to improve her magazine.

The report outlined both immediate and long-term action steps that Eberth and her team could take to improve the content and design of the magazine. It also included distinct “stretch goals” — the exact ways that they should invest any extra resources to get the most out of every dollar.

Eberth says she and her team were thrilled with the report, and have taken steps to improve their magazine already. “

“I could not be happier with the feedback and recommendations in the action plan. I especially found the delineation of the Action Steps and Stretch Goals helpful,” she says. “It was clear that you and your team understand our challenges, and you responded with a plan that is concise, creative and appropriate for our magazine staffing and budget. It was definitely worth the price.”

Click here to learn more about the Magazine Action Plan.