Alabama Alumni Magazine editor Lydia Seabol Avant already had a good magazine when she reached out to Capstone in 2019, but she acknowledges that there were still pieces of the publication she didn’t feel she had totally locked down. “We don’t often get story pitches from freelancers,” she says. “We really needed help coming up with feature story content.”

So when she came across the Capstone Pitch Subscription Service, she was intrigued. “If we could get a couple feature articles that were amazing and topics that we would never have found or thought of on our own — ones that go above and beyond what we can do here and really make that particular issue great,” she said, the service would be completely worth it.

Basically, she said, she wanted “feature stories that would get us out of our rut.”

Lydia joined the Capstone Pitch Subscription service, filled out the personality profile survey of her magazine for our team to analyze, and told Capstone a bit about what she had been considering for an upcoming issue. Within days, Capstone had sent three customized pitches, which included suggested samples and additional details. 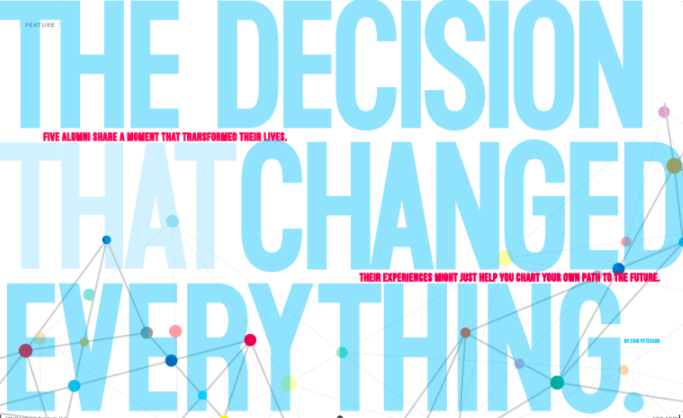 The pitch she selected for the Capstone team to write, which eventually became “The Decision the Changed Everything,” was a story idea about life inflection points, designed to be both useful and inspiring. The story sources included alumni with a range of different class years, careers, and life experiences. “It was an idea that I would not have thought about on my own, and was a story with a different angle than what we have historically run in the past,” she says.

Once Lydia had selected the story, Capstone got to work interviewing sources, writing the profiles, and conducting a full source approval process. We even suggested possible illustrators for the feature.

The result was a beautiful, engaging story that had plenty of admirers. “We got a lot of positive feedback from the issue and from the story in particular,” Lydia says. “The alumni featured in the article in particular were very happy. One of them used the illustrated headshot from the article for her social media profile picture.”

While Lydia was happy with the story itself, she says there were additional benefits as well. “In addition to the story pitches, you also gave me the tip on illustrators while we were working on your story for the fall issue.”

She used the suggestion not just for the story that Capstone did, but for other issues as well.

Beyond that, the service — which she has since used multiple times — has helped her think more broadly about the kinds of stories her magazine can tell. “Working with Capstone has changed my mindset on articles as I try to think about different ways to tell a story, or crafting an article in a ‘news you can use’ format that may be more beneficial to the reader.”