I was delighted to talk to this year’s Sibley-winning editor: Joe Wakelee-Lynch. Joe is editor of LMU Magazine from Loyola Marymount University in Los Angeles.

The magazine is gorgeous and ambitious and singular. (You can read the report from judges here.)

Joe has been with the university since 2006, and the story topics and approaches reflect that deep institutional knowledge: they feel like they could only be done by LMU’s magazine. 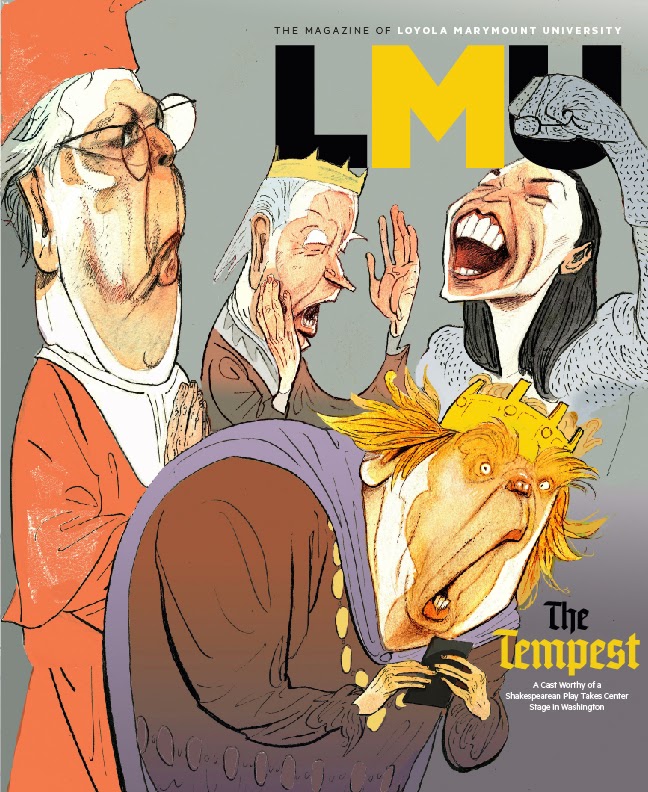 Before we dive into the interview, here are a few more basics: the magazine comes out twice a year (read more about how COVID-19 has affected that schedule below) and goes to about 80,000 alumni, faculty, staff, parents, and friends of the Jesuit Catholic institution.

What a beautiful magazine. Ambitious topics, writing, and art. Has your institution always invested in the publication?

We had a pretty good magazine for a long time, but we had wanted to make it better for years.

We had an advisory committee that met after every magazine was produced to critique the issue. Whenever they criticized what wasn’t working, we were happy. We knew that that would filter out to other people who needed to know that. Other people also thought this magazine could be improved. So that criticism was really welcome to me, because I knew it could help us make the case.

Eventually, we went to leadership and said that we’ve been asking to do a redesign of a magazine for two or three years. If you let us do it now, we can boost alumni pride, engagement, and enthusiasm by giving people something they’re really going to enjoy. It’ll be qualitatively different. And we can use the newly designed magazine to help celebrate one of the biggest events in the university’s history.

That combination of circumstances helped us, and leadership went for it.

For us, it was like having our hands untied. We were pretty sure we would be able to deliver something that would stop readers in their tracks when they got the first issue.

Your choice of stories seem to be both extremely specific to your university while also being widely accessible to readers beyond it. For example, “Dramatis Personae” compares current-day politicians to Shakespeare characters — a story that was published about the time that LMU hosted the DNC Presidential Debate. Another was “Who Are We” about how people think about the identity of Los Angeles. Can you talk about threading that needle?

We do think about our magazine as one that anybody should be able to pick up and enjoy.

The magazine speaks to alumni, faculty, and staff, but it also ends up being a publication that gets handed to people as a way to introduce the university to them.

Prospective students and their parents are receiving a message that an LMU education will put students in the same classroom with faculty members who are on top of the most pressing issues that we all care about. To be a Jesuit university in Los Angeles puts LMU in a very unique and wonderful place. Our magazine should communicate that.

We try to address timely issues that connect to LMU’s mission statement and that our sponsoring religious orders, especially the Jesuits, are on record in addressing.

Let’s talk about what your magazine doesn’t have: a president’s column.

Polls of university magazine readership always say that the president’s letter is one of the least-read pages of the magazine. Readers will tell you they don’t want to read it, and they will proceed to not read it.

Why give people a page that they don’t want to read?

It’s like putting a stamp on the page that says, “You can skip this.” And you should never, if you can help it, have a page in your magazine that’s telling people that they can skip it.

Every page should make an attempt to draw attention.

How has COVID-19 affected your publication?

We were midway through an issue that would have come out in the springtime when the COVID crisis hit. We had half a magazine ready and we didn’t publish it.

The next magazine that would normally come out would have been in the fall of this year. We are not printing that issue either. Our goal is to come back into print in the springtime, and be back with two issues a year.

Anecdotally, people seem to understand the need for drastic measures, but it is disappointing, especially after winning a big award.

But in the meantime, we’ve launched online a special series of election coverage. We’ll produce at least two things a week — stories, podcasts, interviews — until a week or so after the election on November 3.

[Erin says: here’s a link to that coverage.]

What do you and your team read for inspiration?

Editorially, the magazines that I’m looking at include The New Yorker and California Sunday Magazine. There’s a great magazine called Boom California. There’s a tiny, quirky magazine that I absolutely love called Desert Oracle, which is about the Mojave. It’s all about place and location, but it’s a wonderful little magazine and it fits in your pocket. I’m trying to start reading Cha, which is a literary journal based in Hong Kong.

Our art director and photographer pay attention to California Sunday Magazine, The New York Times Magazine, Wired, and an amazing soccer journal called Eight by Eight, which is just an absolute feast.

What advice do you have for other editors ready to raise the bar for their own publications?

The other thing? Money matters. If you don’t have money for freelance writers, start a plan to get money for freelance writers. I think that goes for photography, too. If you can get some money, use it to get talented photographers in your area. Bring them into your magazine. Because that’s one way you distinguish yourself from others. You raise the quality of the magazine and you increase the pride among alumni and readers.

We'll send a you a weekly email with examples of great magazines, case studies with higher ed clients, and quick tips to improve your print publications.
https://getcapstone.com/wp-content/uploads/2018/09/capstone-dark.png 0 0 Erin Peterson https://getcapstone.com/wp-content/uploads/2018/09/capstone-dark.png Erin Peterson2020-10-19 18:18:322021-07-05 12:29:11‘Every page should make an attempt to draw attention.’
Scroll to top