As a former class notes editor, I couldn’t possibly be more excited to share this interview and some incredible resources with you.

Here’s the scoop: Many years ago, I served as the class notes editor for an alumni magazine.

It was grueling, thankless work. I carefully transcribed cursive notes from alumni who were 3,000 years old. My eyes crossed while I captioned wedding photos with dozens of alumni faces. And the only time I heard a word was when alumni called to tell me I’d misspelled the name of their baby.

Trust me: I understand, at a cellular level, why editors want to put their class notes online to free up print real estate. I understand why they want to cut those sections in half or ditch them entirely.

It’s not just that alumni routinely rank it as the number one thing they turn to when they get their magazines. It’s that it’s one of the best ways to truly engage a huge number of your alumni — which is probably a big reason for your magazine’s existence in the first place.

But you don’t have to take my word for it.

You can take the word of Bill Weber, the Director of Alumni Communications for Harvard Business School. 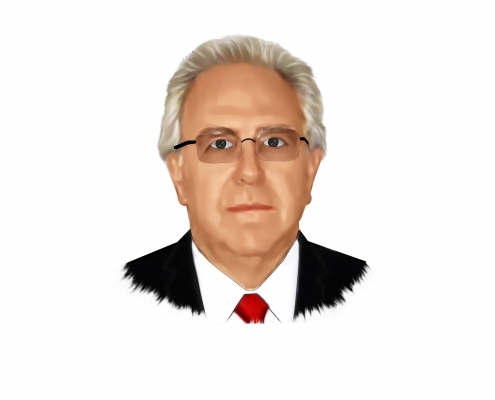 HBS Alumni Bulletin, the quarterly alumni magazine for the school, enlists the help of nearly 1,000 (!) volunteers to produce their Class Notes, which stretches to 450 (!!!) pages for each quarterly issue. (Alumni are split into 3 different categories, and get the 150 most relevant pages for them, but still.)

In a year, that’s 1,800 pages — TWO copies of Infinite Jest stacked on top of each other.

We had a wide-ranging conversation about class notes, and below, you’ll find an edited version of our discussion.

He also shares an incredibly valuable PDF of prompts and ideas that I think you’ll love — no matter what your class notes are like.

You have, by far, the most robust class notes section of any school I’ve seen. Why does Harvard value this section so much?

Class Notes is the single most-popular piece of communication that comes from the school on a regular basis. We have done reader surveys for years. Consistently, 98 percent of the respondents say, “Well, the first thing I do is I turn to my page in the Class Notes in the Bulletin. Then if I have time, I’ll look at the front part.” 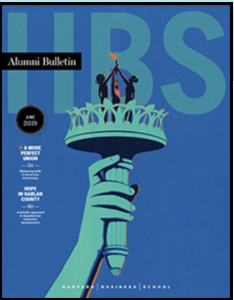 The most recent issue of HBS’s magazine

Is its popularity what makes it valuable? Is there an explicit return on investment?

People want to know what other people are up to. So you have to feed that interest one way or another. The whole point of feeding that is to remind people of their connection to the school and to strengthen the bonds among them as a group. Then, when other communications come from the school or it’s time to do an annual gift or we’re in a fundraising campaign, those alumni are positively inclined towards the school and supporting it. That’s what it’s all about.

I just don’t think, in the near-term future, we would consider getting rid of Class Notes. I think it would be World War III, frankly.

Let’s break down that ONE THOUSAND VOLUNTEERS number.

We have two kinds of class secretaries. For older classes, there is one secretary per class. (Our oldest class with an active secretary is 1950.) But the way the student body is structured, each class is divided into 10 sections of 90 or so people. At some point, we opened it up so there would be a class-wide secretary for each class and there would be a section secretary for each 90-person cohort. So there’s 11 secretaries for any one class, after some point.

They report to us through an online tool. It’s a content submission form, basically, where they can upload their columns and upload photographs. That’s the system that we use to edit all the notes. It has various editing tools built into it — like automatically shortening vice president to VP, or bold-facing names — to help.

How do you manage that many people?

We have a variety of guides and documents. We have a style guide that is sent to each of the secretaries. Then we remind them on a regular basis of certain things. For instance, there’s a length limit (1,800 words) and a photos limit (two, except for reunion classes) — which they push back on all the time, naturally!

The goal is to have them use the online submission tool, but we have certain older, longstanding secretaries who just can’t cope with the online form. So for those, they’ll have someone like their granddaughter email us the column.

There’s one elderly alum who cuts and pastes the letters and emails he gets from classmates into a document. It’s almost like a ransom note. Then he mails it in, so we receive it in its pasted, taped-together form. Then there’s another one who hand writes his 1,800 words. We serve them as best as we possibly can.

The majority play by the rules and use the online tool.

It sounds like you have guidelines, but you also let everyone use their own voice, within reason.

Right. We want to preserve the voice and the tone of however somebody writes. We know that particular kinds of people like to volunteer for this role. They’re networkers and social connectors. Their personality shines through in the way they communicate with people. So to keep it genuine, we want to keep their voice.

When we are doing the editing of the notes, the majority of the work involved in the editing is more like copy editing: making sure that punctuation is correct and that our automated abbreviation system didn’t turn something into gobbledygook. We’re looking for misspellings and that occasional “gone too far” political comment or swipe at a classmate.

The personality is part of what makes it appealing for the readers, because they remember Fred or Susan as speaking that way, and so it comes across. Having people who will put that bit of extra effort into reporting on their classes and things like that makes it hugely different.

There’s no institutional messaging or anything else like that in the Class Notes. It’s just building the bond among people who went to school together and having that then reflect on their personal relationships to each other or their personal loyalty to the school. (Want to see some of the tips and prompts class secretaries get? Get the 2-page PDF here.)

Folks get the most 150 relevant pages of notes for each quarterly issue. That’s still a lot of pages! How do you think about costs?

Yes, it’s a huge operation, and it’s expensive as all get-out. But it’s all worth it.

Every once in a while, we revisit the length limit for columns. I’ve been here 10 years. Just prior to when I came, they made a decision to get more strict about the length, because the notes were growing quite a bit. We’ve maintained that relative strictness, but we haven’t reduced it.

Then there’s the paper stock. It’s very thin but not terribly transparent, like newsprint. We choose that because it’s so much thinner than the paper in the front of the magazine and therefore weighs much less. From time to time, we have to make changes in that paper. It’s definitely worth it, in terms of keeping the cost of the notes down.

Everyone that we have a mailing address for is sent a copy of the magazine, all 84,000, regardless of where they live, including the two alums in Uzbekistan.

Let’s go through some of the other arguments against class notes sections. First, everybody’s already on social media, right?

That’s a challenge that we have in classes from the last five or six years in particular. They’re posting a picture of their breakfast on Instagram. Everyone in their group knows the minute they have a baby. So there we fight a little bit of an uphill battle of, “Why should I submit a report about my latest vacation when I posted 400 Instagram photographs of our trip to Nepal?”

But even for those classes, there are secretaries. They work to gather news as best they can. Not every class or section is perfect, but most of them do it. My feeling is that as those alumni age, as they get to their fifth or their tenth reunion, the classic nature of Class Notes will make much more sense. At some point, they’re going to lay off of Instagram.

Or get off certain platforms altogether. As people change social platforms, they might not bring all of their university classmates with them.

Platforms are changing. We’re present in all of that stuff, and we celebrate success and all the rest with classmates on those social platforms.

We monitor things. We keep a record of how many pages of notes were done by each class and section in each issue. We do it just to watch the up and down cycles. That’s where we noticed it was like five, six years out or so, is where the Class Notes are the thinnest. Then once you get past 10, it’s pretty consistent. Nearly every class and every section has a secretary, and they’re producing notes at least two or three times per year in the production cycle.

Another gripe: class notes aren’t particularly timely, at least compared to what most of us are used to.

Class Notes, in the form that we do it, runs completely counter to all other publishing trends because it’s on paper and it takes a long time to get the word out. The news, what’s going into Class Notes, is four to six months old by the time somebody receives it. But it has a sort of timeless quality that doesn’t bother the majority of the alumni.

That said, we post Class Notes online as soon as they’re ready in our production cycle. That’s usually three to as much as five weeks ahead of when the magazine arrives at people’s doors. We promote it in our e-newsletter and mobile app as soon as it’s available online. And people do read the notes online — especially international alumni, for whom it takes even longer to receive their magazine.

Are there other things that you think make the print version valuable?

The classic argument about why a print publication has benefits over a digital one is the browsing factor. We do run photographs. There are a couple photographs for everybody’s column. If you flip through the pages, you’re going to find interesting pictures that might pull you in. There’s the person riding the elephant or parasailing somewhere or on top of Mount Everest that gets your attention. It gets you to read the caption and maybe read a little bit of the item. That’s great if that happens, because those are reflections on the interesting lives that our alumni have.

Do you get story ideas from this section?

Class Notes are a gold mine for story ideas. Those ideas are both business-related (people starting new companies or second careers, writing books, supporting nonprofit work around the world, etc.) and personal experiences and adventures. One of my favorites from mining Class Notes was an alum who holds the Guinness World Record for having climbed the Seven Peaks AND sailed all Seven Seas. And he sailed some of them with his wife and their severely disabled daughter. Now he uses the experience as a motivational speaker on leadership and mission focus. (You can read the story here.)

What do you think? How is your own class notes section working — or not working? Shoot me an email and let me know!