Without exception, the winners of CASE’s Robert Sibley Magazine of the Year are gorgeous and well written.

But this year’s winner was something I’ve never seen before: short!

In a tight 28 pages, SF State Magazine is as ambitious as any magazine out there, and it accomplishes as much as many publications twice that length. 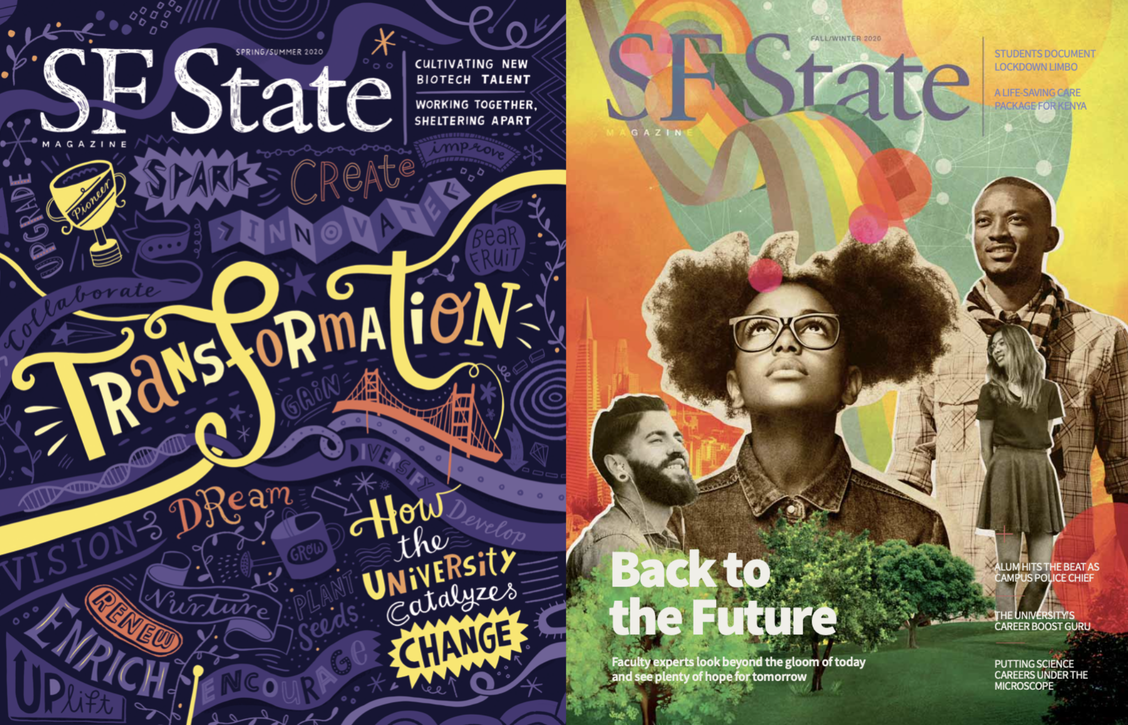 To find out more about how editor Steve Hockensmith earned the field’s highest honor this year, I asked him to share what makes his magazine tick.

Want to read more from Sibley-winning editors? Scroll down to the end to get links to interviews with past Sibley winners and a Sibley judge.

Now, on to the interview!

First, tell me a little bit about your school and your magazine.

What does your magazine team look like — how many people are on your staff, and what kind of outside help do you get?

We have a small planning committee drawn from various departments within the University Advancement division, then most of the content is created by staff members.

We use a freelance designer as well as freelance photographers and illustrators, but at this point all the writing is done in-house with one exception: Our “My SF State Story” page is a personal reflection written by a University graduate.

I oversee the copy, and our creative director, Barbara Stein, manages all the visual elements and develops the overall look of every issue. We also have a photo editor, Paul Asper. (Paul is a talented photographer himself, which comes in really handy.)

All of us have many other duties — marketing materials, newsletters, the University website — so there is no full-time magazine staff.

I loved “The New Now,” a collaboration with one of the university’s journalism classes. I have seen similar pieces, including one in New York magazine, but yours was more creative and ambitious. Can you tell me how this project came to your attention and how you were able to make the most of it?

We really lucked into that. A version of it had been posted online as part of a project for a photojournalism class, and Paul, our photo editor, saw it.

We were wowed by the pictures and personal reflections, but I was a little reluctant to adapt it for the magazine at first. We had a theme for the issue — “the future” — and I was envisioning it as bright, colorful and upbeat to contrast with the dark, frightening time we were going through. (This was in early fall 2020, as the pandemic raged and the election loomed.)

What the students had created felt a bit downbeat, since it focused on the struggles they were facing as they adjusted to life in lockdown. I got over my reluctance to include it, though. The issue was supposed to promote optimism, but that didn’t mean we should ignore the harsh reality for our students at the time.

What story are you most proud of having done over this past year? Why?

“The New Now”! Which is kind of funny to admit, because we didn’t create it. The students (and their brilliant teacher, the Pulitzer Prize-winning photojournalist Kim Komenich) did all the hard work. We were just curators. But I guess I can be proud that we recognized the opportunity and made the most of it.

We’ve wanted to include more material from and about current students, but it’s been hard to manage, especially during the pandemic. The life-in-lockdown photo essay was pure gold that just fell into our laps.

What is something you think that your team or your magazine does really well that gives you an edge?

I’d say collaboration is the key. We’ve been pulling in more ideas and content from our communications colleagues across the University — folks who work for SF State’s various colleges — and that’s broadened our coverage, created goodwill and made it easier to keep the wheels turning during a difficult time.

Your magazine is just 28 pages. Is there a specific reason for this? (You do seem to be able to support great writing and art, so it seems like it is not primarily financial?) What are the benefits of those types of constraints?

The length is something I inherited, so I don’t know the original rationale for it. But I’m quite happy with the length and wouldn’t want more pages. It gives us room for our departments and three features, which is all we need to get across that the University and its graduates are doing cool things.

It also keeps the magazine manageable and economical for a small department with a small budget. Adding pages would give us a bit more breathing room, sure. But I don’t think it would make the magazine more impactful. Perhaps the opposite.

Your class notes are really nice, with short profiles, pull quotes, and a curated Gator bookshelf. What are some of the ways you try to make that section engaging for all readers — so they don’t just go directly to their class and skip the rest?

When I took over the magazine, the Class Notes section was four pages, and maybe half the items were submitted. The rest I came up with by following alumni in the news.

Over the last couple years, though, we’ve been getting more and more submissions, so we’ve expanded to six pages, and I don’t supplement much at all. I guess I could try to credit the section’s readability to my amazing editing, but it’s really all about our alumni. They’re just an interesting, eclectic, accomplished bunch of people!

One of the things the judges praised about your entry was its strong sense of place. Is that something you’re fairly conscious of?

Absolutely. SF State has a really unique vibe — kind of scrappy and can-do in an idealistic sort of way — and we’re always looking for stories that reflect that.

It can be tough to capture that energy on the printed page, so it was lovely to hear that it came through for the judges.

What do you pay attention to for inspiration? (Could be magazines, but doesn’t have to be limited to that.)

Barbara, our creative director, keeps an eye on a zillion magazines and websites and often brings in design ideas and feature concepts based on things she’s seen elsewhere.

I don’t do as great a job of that, to be honest. But I do pay attention to the conversations and trends on social media and try to stay in touch with the general zeitgeist. I don’t always succeed, but fortunately we’ve got some younger, hipper staff members who aren’t shy about educating me!

What is one piece of advice you’d give other editors who want to kick their own magazines up a notch?

Having a theme for each issue is really helpful, even if it’s not one you tout on the cover or overtly acknowledge in some other way. It gives you a focus that forces you to think strategically about every bit of content you or may not include.

You don’t have to be inflexibly strict about it. We’re not. But having an overarching concept you’re trying to stick can lead to a more memorable magazine.