Whether you write for alumni magazines or not, it’s safe to say we’ve probably all written our share of ridiculous stories.

For example, I spent my first year after college writing for a trade magazine called Athletic Business. I wrote 2,000-word stories on low-maintenance playing surfaces for hotel basketball courts and in-depth features on field house netting. 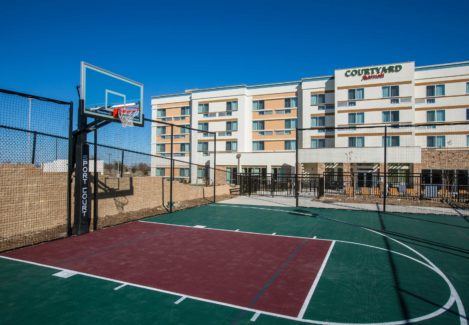 Not everyone has the chance to write 2,000 words about this basketball court. I did. :(

By the time I landed at an alumni magazine, I figured I’d gotten all the crazy stories out of my system.

But with alumni magazines, I was introduced to an entirely new genre of stories that I found completely perplexing: roundup features.

As you know, these are a series of short profiles of people who all share some important characteristic. They all have a certain kind of job, or the same employer, or some specific kind of achievement. If you’ve been working as an alumni magazine editor for awhile, you’ve almost certainly assigned or written a few of these stories.

But they are their own animals, and seemingly unique to alumni magazines. After all, the New Yorker doesn’t run features called “Here are 10 podcasters!” and Sports Illustrated doesn’t do cover stories on “7 people who competed in extreme endurance events!”

What, exactly, are roundups supposed to tell readers—beyond the fact that schools, not surprisingly, produce some alumni who share similar interests?

I’ve been giving the roundup feature a hard time, but maybe I shouldn’t be.

After all, despite my insistence that they’re unique to alumni magazines, many other magazines definitely do roundup stories. The difference? They often add superlatives to give the stories more heft. For example:

30 most influential teens
100 most powerful people in Hollywood

Like school rankings, these lists aren’t necessarily based on obvious, measurable criteria. In this case, they’re basically just roundup stories on a larger scale.

Of course, you’re probably never going to get away with ranking your alums, which is perhaps why non-ranked roundups gained currency in alumni magazines. But that doesn’t mean you’re stuck telling the same old “Here are five alumni in [slightly unlikely career]!!!”

Here are three ways to rethink traditional roundups to make them, in my opinion, one million times more delightful for your alumni.

Question: Would your reader like to read six profiles of people in the restaurant industry for your food issue? Maybe, maybe not.

Better question: Would your reader like to read an insider’s guide in which six people from the restaurant industry talked about how they assemble those Instagram-worthy plates, share the secret perks high-rolling diners receive, and tell you the five things you should never say to a bartender? YES YES A THOUSAND TIMES YES.

Everybody wants a backstage pass—to get a glimpse of the hidden worlds that most others don’t have access to. Insider’s guides do just that, and your alumni sources serve as the experts who give your readers the exclusive peek into their lives and work.

Certainly, that doesn’t mean you need to jettison all the other details you might include in a traditional roundup. You can still include information about the alum’s background and the influence that your school had on their career trajectory. But zero in on some of the details about the work that intersect with the everyday interests of your readers while offering a little bit of VIP information.

Here are two example of roundups as Insider’s Guides:

2. Reposition a roundup as a service story.

Roundup-stories-as-service-pieces is another reader-friendly way to package a story. While an insider’s guide can have “news you can use” elements, it’s not required.

Service features, by contrast, are focused exclusively on the tips, tricks and advice that alumni can use in their own lives once they finish the story.

For example, maybe you’re writing a piece about five professional artists. They can offer ideas about how people can incorporate creativity into their own lives, two ways to take less-terrible photos on a smartphone, and what people should be thinking about when they buy their first piece of “real” art.

After all, your readers are college graduates, which means that they’re curious and eager to learn. Let your alumni magazine be part of that process.

Here are two examples of roundups that are actually service stories:

Use Your Head (brain research at Kent State)
The Best Advice I Ever Got (leadership and business advice, HBR)

3. Vary the length and format

One of the most common (and in my in my mind, misguided) approaches that editors take to roundups is the “Give me five profiles of 400-500 words each” feature story.

While it’s a good way to ensure that no alum feels slighted, it might be a mistake for the story you’re trying to tell. What if one alum’s story is best told in 800 words, while another is better told in 150? Do you really need to have five profiles told in a straight narrative style?

You can absolutely have a 2,500-word story featuring five people. But maybe that means one person gets 1,000 words, another gets a one-question Q&A, a third gets two separate service-y pieces, and so on.

In other words, don’t give yourself unnecessary restrictions.

You don’t even have to provide as much variation as I’ve suggested above.

For example, Fast Company profiles the 100 most creative people in business in one of its summer issues each year. Most of the profiles are about the same length, but the writers find subtly different ways to package each story so it doesn’t feel like you’re reading an endless series of monotonous profiles, all with the exact same rhythm. Some are Q&As, some are as-told-tos, some are lists.

TAKE ACTION: Before you click away from this piece, think of an upcoming roundup story on your list and write down three different ways you could repackage it to make it more interesting to your readers. Could you talk to a slightly different group of sources to make it more service-y or create an insider’s guide? Can you imagine different story elements that you could use beyond traditional narrative storytelling that would make it more engaging?