Here’s a roundup of some of the most inspiring ideas I’ve seen lately.

1. Learn from this incredible profile. 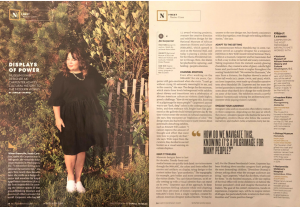 I love the recurring Master Class profile from Fast Company’s print magazine. It’s a beautifully packaged glimpse into an unusual career. The profile above is of Aki Carpenter, a museum exhibit designer known for her work on the National Museum of African American History and Culture.

It shares fascinating insights into the challenges of the career itself and digs deep into what’s required to rise to the top of the field. More than that, her ideas are insightful even if the last time you saw a museum exhibit was during a school field trip.

If “profile of an alum with a quirky career” is part of your story arsenal, study this piece to see how you can make your profiles even better. (Can’t read the text? Check it out here.)

2. Make the case for your print magazine.

Many schools have been sending out alumni magazines for a century (or more). It is — without question — the flagship publication for your alumni and donors. But that doesn’t mean everyone sees it that way. If you’ve got to persuade the higher-ups of the value of your print publication, here’s an exhaustive guide on the case for print, with real research to back it up.

3. Get some analog loot.

One of my favorite things to do during the holiday season is to get plenty of stuff for myself. Here are a few things that I think that you guys, a buncha word nerds who appreciate real-world stuff like magazines, might enjoy as much as I do:

4. Think about how you want readers to feel.

Plenty of institutions have mission statements for their magazines (which is important). But the very best of them also do more than just methodically execute on their magazine’s big ideas. They also evoke emotions. They create a mood or a feeling in readers from the moment they pick it up.

Here’s one example: Michael Grossman, the founding creative director of Saveur magazine, talked about developing Saveur from scratch 25 years ago. Specifically, he shared what he wanted people to experience when they picked up the magazine.

He said, “I felt strongly that Saveur should appear as if it had been around for 100 years, as if it weren’t a publication we were inventing and, instead, one whose legacy we merely sought to uphold — the kind a worldly great aunt might save in slipcases.”

WOW. I mean, I will be honest, that is a slightly weird image at the end there, but it is very specific. Immediately, you can imagine the vibe of this magazine that had not yet been created.

Here’s the question you should ask yourself: What do you want your readers to feel when they pick up your magazine? And how will you work to achieve that goal?