School’s in session! Here at Capstone, we’re heads down on projects for a slew of amazing clients, both new and longtime. But that doesn’t mean we don’t have time to track down a few new cool things for you to think about.

But first, here’s what we’re up to. It was a busy summer for Capstone, and many of the projects we’ve worked on are starting to make it out into the world.

How to do a theme issue.

I love it when university magazines tackle big themes in interesting ways. The right concept serves as a metaphor, and it can help us see the world in an entirely new light.

That’s why I was especially impressed by George Washington University’s Power Issue. Unlike traditional power issues, which might cover, say, CEOs or high-level politicians, the editors conceived of power more broadly. They talked to a lightning strike survivor, a bodybuilder, and an NFL player who gave (and received) some of the toughest hits in the sport. They talked to a judge and the grandson of a president.

What made it even more ingenious were the themes within the theme: manufactured power, natural power, and the power of identity. The issue is incredible, and you should check it out.

Want to read more about theme issues? Read this interview with Stanford’s Michael Freedman, who also focused on big themes to guide his magazine.

What is Rev.com, Alex?

The question I get approximately one million times per year is about the transcription service my team and I use. And the answer is Rev. We love it! It’s $1/transcribed minute, done by humans, and 100 percent worth it.

Don’t have that kind of cash to spare? We have also tested Trint (AI — and the next best of the bunch), which ranges from $0.20-$0.25/minute, depending on what package you buy. It’s pretty good if you’ve got extremely clear audio and a little bit of time to correct errors. The interface is really nice, too.

You might also test out Temi, which is a very budget-friendly $0.10/minute, but not nearly as good than the other options.

Want to dive even deeper? Here’s a comparison chart of 10 different services.

If you’re getting subtle (or not-so-subtle) nudges to put important donors (or potential donors) into your magazine or on your website, you don’t have to resist. Just do it in the best possible way.

You can read about how we worked with Purdue to do exactly that.

Remember what actually matters to those who love your school.

Plenty of folks have predicted doom for higher ed over the years. That said, this CNBC headline is particularly dire: A Harvard expert expects half of American colleges will be bankrupt in 10 to 15 years.

The professor, Clayton Christensen, says the trend is for education, as a whole, to move online. Nonetheless, he adds a glimmer of hope for bricks-and-mortar schools. I found his insight particularly illuminating for communications folks. 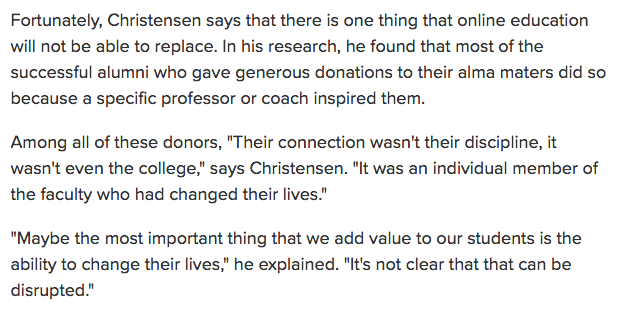 For me, it’s that schools should be reminding readers of these beloved professors, coaches, and staff members at every turn. It’s not just for donors (though that’s obviously important!) — it’s for everyone.

Of course you should also be letting people know about all the cool things happening on your campus — new priorities, programs, initiatives, research — but never forget the things that your alumni deeply care about.

Ask alumni to share the stories of the people who influenced them, and find as many ways as possible to remind readers of the people making a real difference in your community.