A few months ago, I was flipping through a stack of alumni magazines and I came across an arresting two-page photo spread in Holy Cross Magazine. The mystery photo had a caption that asked alumni to help identify the people in the image and share any additional relevant details. (Side note: Am I getting your magazine? If not, put me on your mailing list!)

I checked in with editor Melissa Shaw, and here’s what she said about the spread, which is a regular department in the magazine:

Mystery Photo was added to Holy Cross Magazine in its latest redesign (7 years ago) by our Art Director and Designer Stephen Albano.

He notes he picked up the idea from another alumni publication (he can’t remember which).

He found a stack of photos in College Archives for which the archivists had no info or IDs, and went from there. That makes the quarterly feature fun for alumni (especially if they solve it – or are in the photo) and it helps College Archives ID these pictures for posterity.

In the following issue, we run a Solved Photo brief where we share what info people sent in. It’s a great way to get more alumni names in every issue and especially engage whatever class year(s) are pictured.

We get a few dozen emails per issue, which doesn’t sound like a lot given our 45,000 circulation, but it’s a popular feature with readers. They definitely stop, look and read each issue. It’s one way to get uniquely Holy Cross content in the magazine that readers would not find in any other publication.

It’s also an easy lift with great ROI: All you need for the Mystery Photo is a cutline soliciting responses, and the Solved Photo followup in the next issue is a couple hundred words, mostly quoting people who wrote in with the answer or their memories.

Okay, this is Erin again: I love it!

Melissa shares a ton of extremely practical, tactical tips that you can use to add this department to the magazine immediately — and make sure that you hit the ground running.

Take it away, Melissa!

What has (and hasn’t) worked for us

Here are a few useful ways to think about this department.

1. Don’t use photos that have outlived everyone.

Why? No one is around to identify it. 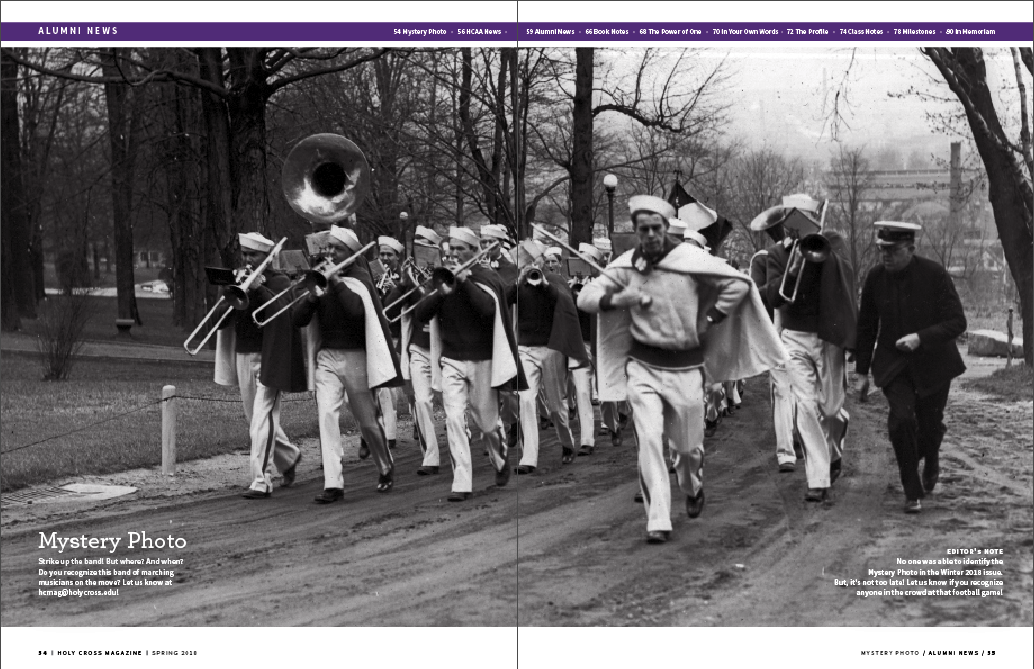 This is the only photo in my tenure to not receive even a single email, which makes me think we picked too old a photo. It’s cool — and we still have no idea what this is all about — but useless if no one can identify it.

We run the photo across a spread to open up the Alumni News section. The bigger the photo, the easier to ID, especially if there are many people in the photo, like below. 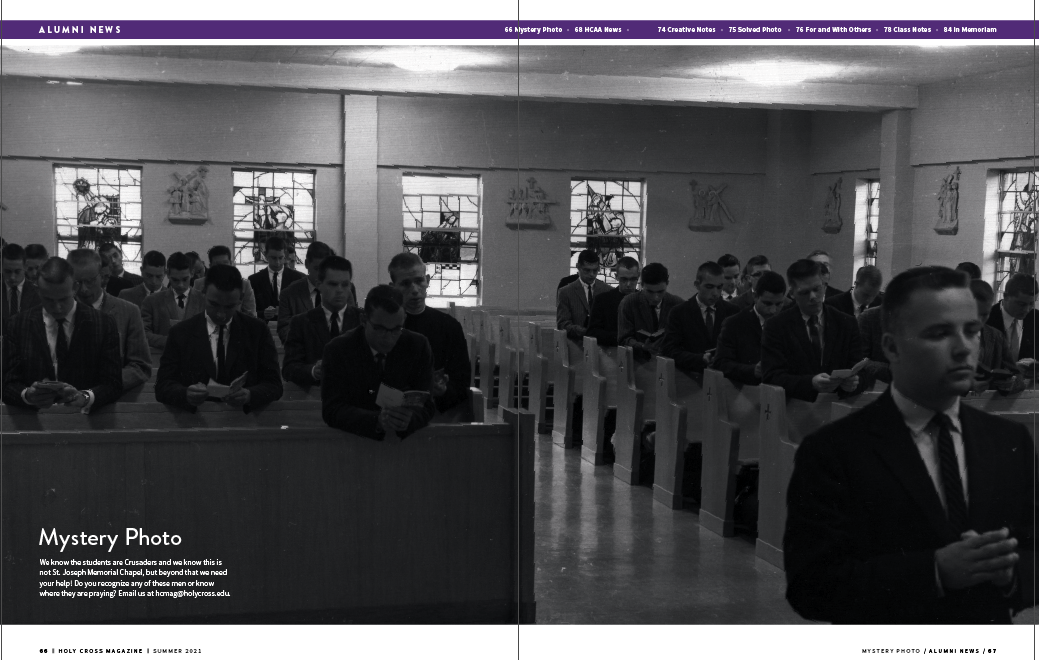 I was surprised this photo did as well as it did with responses, as we were pretty sure it was not taken on campus (it wasn’t). And even with poor lighting, we got IDs of not only the place (a long-defunct Jesuit seminary about 200 miles away), but also of many students in the pews.

You’ll get more replies, and the more people, the more likely you will ID everyone. 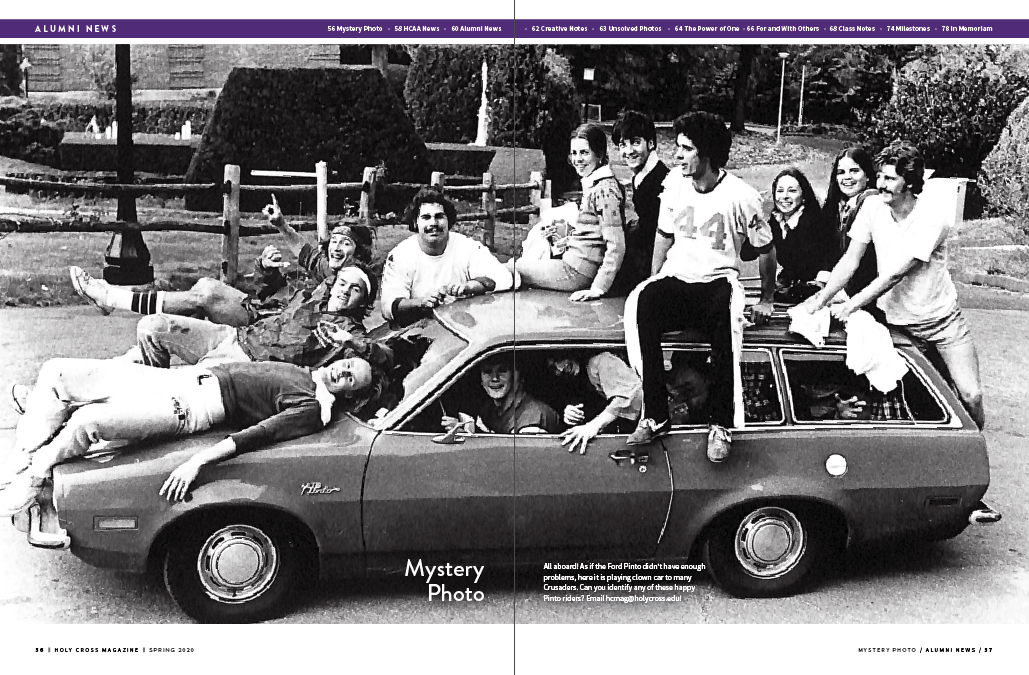 Emailers (several in the photo) ID’d everyone in this shot and shared the fun story behind it. 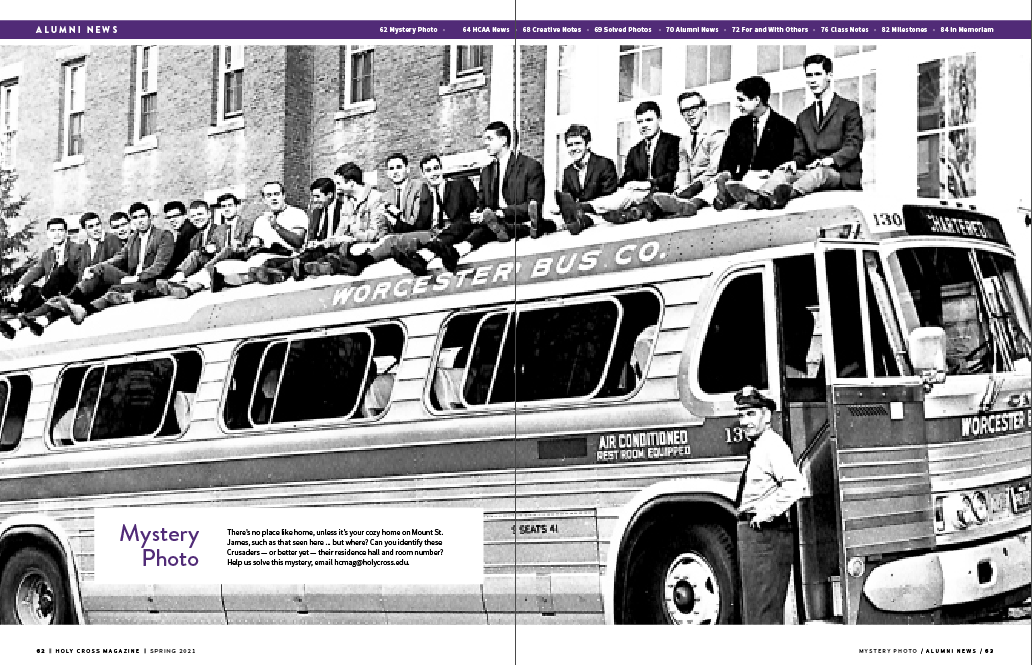 We had no idea what was going on here. Why was a city bus on campus? Why were all these nattily attired men on top of the bus? The men knew: It was dorm room picture day for the yearbook and emailers told us that year each floor tried to outdo the other with odd locations.

Many on the roof wrote in and they were able to ID every person (and share their regret that they made the dangerous climb up).

5. Use more than one photo per issue, in another location

While Mystery Photo traditionally opens up Alumni News, we’ve used them in the table of contents when we were short on pictures or Stephen felt he wanted to get another one in. 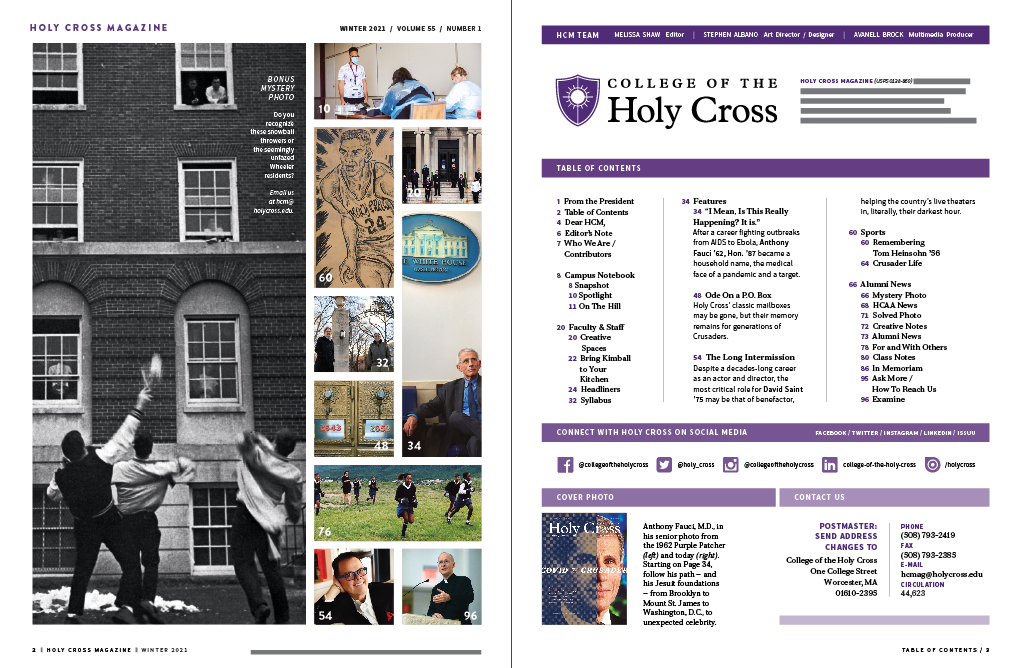 This photo got excellent engagement in this spot and shook up the traditional design of our table of contents.

6. Work with an incredible art director/designer

I’m lucky in that Stephen knows our audience so well, he chooses fantastic photos for this staple because he understands the readership and the College intimately.

That also translates into the work he does throughout each issue. It’s his authentic understanding of Holy Cross and its alumni — and his skills — that translate into the magazine being popular and well-received with the readership.

If you’re looking for a way to get a bump in engagement, consider this approach. It’s fun, it’s repeatable, and it’s something that will keep your readers checking in issue after issue.